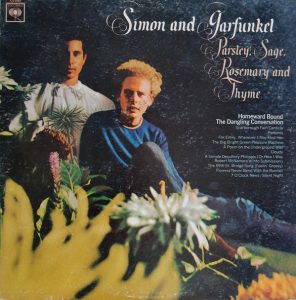 So I will accept your scorn, and double down on it by saying that this might be the most beautiful song Paul Simon has ever written — it’s definitely on the short list if Prettiest Songs Ever Recorded, Hippie-Dippie Bullshit Department — and I love every single thing about it.

In Swimming to Cambodia, Spaulding Grey talks about the concept of a “perfect moment,” which he had swimming in the Indian Ocean, and I think that’s what “The 59th Street Bridge Song (Feelin’ Groovy)” is about: a perfect moment.

I think I had a perfect moment once: I was going for a long run in the fall of 1990, and at some point the Velvet Underground’s 1969 Live version of “What Goes On” came on my Walkman, and about two-thirds the way through the organ solo — Doug Yule weaving and out of Lou Reed’s beyond-awesome rhythm guitar — the music and the endorphins and the beautiful autumn weather kicked in all at the same time and all was right with the world.

Then I was hit by a car.

Nah, just kidding. Sorry about that.

I also love the feeling of — for lack of a better phrase — timelessness in the final verse.

I’ve got no deeds to do, no promises to keep
I’m dappled and drowsy and ready to sleep
Let the morning time drop all its petals on me
Life, I love you
All is groovy

Also, the minibeats of hesitation on the phrasing of “da-ppled and dro-wsy and rea-dy to sleep” is absolutely otherworldly, and kills me every single time.

Hell, I’ll even stan for the ending, an overdubbed round of “ba-da-da-da-da” accompanied by, I dunno, a recorder that goes until the fade. And it’s all over in 1:43, so even if you hate it, it’s gone before you know it.

The whole song is such a delicate dance that one false step would have sent the thing spiraling into a well of goo, as was evidenced by the version that actually became a hit single in 1967, a baroque horrorshow by the California band Harpers Bizarre. As arranged by Leon Russell, this version also had Glen Campbell, Carol Kaye and Jim Gordon on drums — all of whom should have known better — completely overshadowed by a series of woodwinds, fey vocals and an acappella section that was clearly stuck on there because they’d run out of song too soon. Fucking hippies.

Oh, and one of the lead singers of Harpers Bizarre was Ted Templeman, who was to go on to greater things by producing Little Feat, The Doobie Brothers, Montrose, and a little band called Van Halen, who would have done a killer version.

Of course, “The 59th Street Bridge Song” has also been covered and referenced about a million times, and of course my favorite is a throwaway joke on the “Who Shot Mr. Burns” episode of The Simpsons.