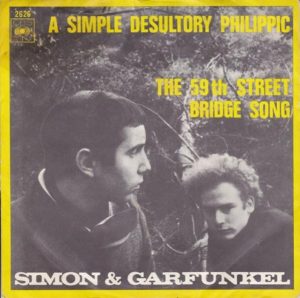 Luckily, he was making fun of electric Dylan. And so over a fuzzy, descending guitar riff, Simon starts in with a reference-heavy word salad:

I been Norman Mailered, Maxwell Taylored
I been John O’Hara’d, McNamara’d
I been Rolling Stoned and Beatled ’til I’m blind
I been Ayn Randed, nearly branded
Communist, cause I’m left-handed
That’s the hand I use… well, never mind

Stealing equally from “Subterranean Homesick Blues” and “From A Buick 6,” “A Simple Desultory Philippic (or How I Was Robert McNamara’d into Submission)” could have gone off the rails at any time, but in reality, it never really was anywhere near the rails.

And so with Simon’s acoustic guitar answering the fuzzy electric guitar and somebody (uncredited, so it might could have been Simon himself or maybe Larry Knechtel, since it was recorded with the Wrecking Crew) going nuts on the organ, “A Simple Desultory Philippic (or How I Was Robert McNamara’d into Submission)” gathered steam and got more pointed as it kept going.

I been Phil Spectored, resurrected
I been Lou Adlered, Barry Sadlered
Well, I paid all the dues I want to pay
And I learned the truth from Lenny Bruce
And all of my wealth won’t buy me health
So I smoke a pint of tea a day

My favorite part is the bridge, in which Simon introduces a poorly-played harmonica into the proceedings, as well as talk-singing:

I knew a man, his brain so small
He couldn’t think of nothing at all
Not the same as you and me
He doesn’t dig poetry
He’s so unhip when you say Dylan
He thinks you’re talking about Dylan Thomas
Whoever he was
The man ain’t got no culture
But it’s alright, Ma
Everybody must get stoned

Talk-singing? More like talk-zinging, amirite? Either way, every time Simon complains “the man ain’t got no culture” it well and truly cracks me up, even as Simon heads into the final verse.

I been Mick Jaggered, been silver daggered
Andy Warhol, won’t you please come home?
I been mothered, fathered, aunt and uncled
Been Roy Haleed and Art Garfunkeled
I just discovered somebody’s tapped my phone

And yes, it all feels like a throwaway — an off-the-cuff inside joke — but the truth is that “A Simple Desultory Philippic (or How I Was Robert McNamara’d into Submission)” is yet another remake of a song on Simon’s 1965 U.K.-only The Paul Simon Album. And actually, it isn’t just a remake, but massive a rewrite both lyrically and musically.

You can see all of the lyrical differences on its Wikipedia page, but he also rewrote the music: since the 1965 album was all acoustic, so was the Dylan parody, going after Dylan’s talking blues style. So clearly, Simon put a lot of thought into all of this.

In the end, Simon spits out a contemptuous “Folk Rock,” drops his harmonica rack to the ground and complains “I lost my harmonica, Albert.”

I couldn’t find any contemporary Dylan response to all of this, but in 1970, he recorded a pretty bad countryish version of “The Boxer” as a duet with himself and stuck it on his worst album to date, Self-Portrait, which is also pretty funny.

In the end, of course, Bob Dylan and Paul Simon became friendly enough to tour together in 1999, so alls well that ends well, I guess.