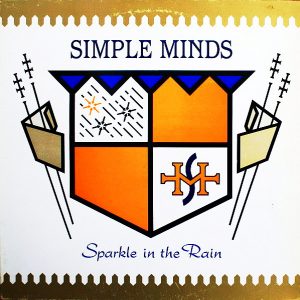 Driven by the pumped-up rhythm section of Derek Forbes on bass and Mel Gaynor on drums, “The Kick Inside of Me” starts off with front man Jim Kerr screaming an overdubbed, staggered chant of “I, I, I, I, I, I” which sets up guitarist Charlie Burchill’s sparkly, shiny guitar riff which bounces off of the roof of the sky, setting up the first verse nearly a minute into the song.

Kerr starts at about an 8, but he’s up to 10 almost instantly, getting ever more excited as he continues with the band all still raging around him.

And as Kerr screams “deeeepp inside of meeeee!” keyboardist Mick MacNeil, who’s mostly hovered in the background providing atmosphere, answers with a keyboard of molten lava, sounding like goddamn Jon Lord or something, nearly overpowering Kerr, who’s still screaming things like “kick away my life kick away”, while Burchill joins in with his guitar, and the whole thing is on the verge of completely falling apart, as Kerr continues to chant, scream, plead and mutter in and out of the rest of the band.

Occasionally, Kerr catches his breath and sings something semi-quiet, but not for long. Instead, for the rest of the song, he’s yelling things like “shake off the ghosts” and “take me away” like a fucking madman, not even really caring about his phrasing but acting like he’s gotta get these words out right this second or he’s going to die.

It’s utterly unhinged, and therefore utterly magnificent, right up to the end, at which Kerr is still screaming and muttering while the rest of the band just kinda stops, except for Burchill, who plays some random notes that leak out of his guitar.

In any event, “The Kick Inside of Me” was right up my alley in 1984 and I played the shit out of it on KFSR, and it’s still my favorite Simple Minds song, even though by the time I saw them at Selland in 1986, it had already dropped off of the setlist. And in fact, if Setlist.fm is to be believed — which, only partially, since that Selland Arena show is not on there — they almost never played it, period. Too bad.

“The Kick Inside of Me”