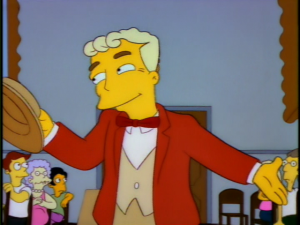 And, of course, “Marge Vs. The Monorail” is definitely one of the peaks of that peak. This episode was written by an upstart former Harvard Lampoon & SNL writer named Conan O’Brien (who was never heard from again), and it’s about . . . well I’m not going to dig deep into the plot of the episode — because I literally can’t imagine that anybody reading this hasn’t seen this episode a half-dozen times — but basically the setup to the song is that Springfield has come into some unexpected money, and there’s a town hall where they are discussing what to do with the windfall. Marge, of course, being the practical one, wants to spend the money on things like street repair

And suddenly a stranger appears. A guy named Lanley . . . Lyle Lanley, voiced by the late great Phil Hartman. Sigh. We still miss Phil Hartman, who did great work on Saturday Night Live, the utterly terrific Newsradio and, of course, The Simpsons until he was murdered by his wife in 1998.

In any event, Lanley, sporting the half-eyes that mean you can’t trust this Simpsons character at all, breaks the ice with a couple of jokes and a well-timed neg — “it’s really more of a Shelbyville idea” inspiring Mayor Quinby to declare “just tell us your idea and we’ll vote for it”. Lanley gives them his pitch for The Springfield Monorail channelling “Ya Got Trouble” from The Music Man, which was the style at the time.

And it’s the call-and-response that makes this song for me, as Lanley instantly hooks the townfolk — starting with Ned Flanders — into yelling and then chanting “monorail, monorail, monorail” as Lanley plays the piano and answers their questions, ingratiating himself more and more with every answer.

Barney: What about us brain-dead slobs?
Lanley: You’ll be given cushy jobs!

Grandpa: Were you sent here by the Devil?
Lanley: No, good sir, I’m on the level

Wiggum: The ring came off my pudding can.
Lanley: Take my penknife, my good man!

After that, Lanley goes for the kill:

And as the citizens of Springfield throw up their hands and joyfully shout “monorail,” as Lanley exhorts and encourages them, Marge — not swept up at all — makes one final protest.

Marge: But Main Street’s still all cracked and broken.
Bart: Sorry, Mom, the mob has spoken.

Even though it’s a toss-off, Bart’s “Sorry, Mom, the mob has spoken” is absolutely one of my all-time, all-time favorite Simpsons jokes, one of those I try to , reference as much as possible.

At the end of the song, the whole town spills on to the steps, led by Lyle Lanley, singing “monorail!” and end in a big flourish of jazz hands. Except for Homer, who somehow missed that the song was over, “mono-d’oh!”