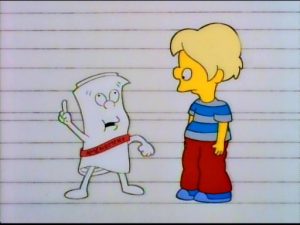 It is, of course, a straight-up parody of a previous Certain Song, the School House Rock classic, “I’m Just A Bill..” For those of you keeping score at home, this is not the first time I’ve written about a Certain Song that is a straight-up parody of another Certain Song, as those of you who might remember “ Gilligan’s Island (Stairway)” or even “Southern California Brings Me Down” or for that matter “Green Eggs and Ham” or “Meet The Flintstones” though those last two are more about the satire of the artist.

In any event, none of the above had any input from the target of the parody, but it goes to the clout of The Simpsons that “The Amendment Song” was sang by the same guy who sang “I’m Just A Bill,” the late Jack Sheldon, who had no issues singing the vicious lyrics penned by legendary writer John Swartzwelder.

The cartoon for the “Amendment Song” uses the same framing device as “I’m Just A Bill”: a young, unaccompanied boy discovers an anthropomorphic piece of paper on the suspiciously deserted steps of Capitol Hill. And he wonders: “Hey, who left all this garbage lying on the steps of Congress?”

Whereupon the anthropomorphic piece of paper defensively claims he isn’t garbage, and starts singing about what he is.

There’s a lot of flag burners
Who have got too much freedom
I wanna make it legal
For policemen to beat ’em.
‘Cos there’s limits to our liberties
Least I hope and pray that there are
‘Cos those liberal freaks go too far

While flag-burning has receded as something for even the Right to worry about: 25 years later, they’re all about abolishing accurately teaching history and science — and well, anything else that offends their delicate senses — but the point if the song still stands: a lot of the laws they want to make are unconstitutional, like that Texas abortion abomination that’s currently before the Supreme Court.

Meanwhile, Bart & Lisa — young millennials who didn’t grow up on Schoolhouse Rock — are watching this all unfold, leading to another one of my favorite exchanges as the music vamps in the background

Bart: “What the hell is this?”
Lisa: “It’s one of those campy throwbacks that appeals to Generation-Xers.”
Bart: “We need another Vietnam to thin out their ranks a little.”

Meanwhile, after the Amendment-to-be helps the boy realize that with a Constitutional Amendment, we could make all sorts of crazy laws, the boy asks what would happen if they said he wasn’t good enough to be in the Constitution, and gets this somewhat anachronistic response:

Which is apparently enough, though what a sitting U.S. Senator has to do with ratification of an Amendment, I’m not sure, but it was a funny joke at the time, of course.

And, of course, the funniest joke is that the anti flag burning Amendment gets ratified, and we see a bunch of clearly shitty bills running up the steps towards Congress, all of which pisses Lisa off enough to spontaneously slug Bart while exclaiming “So it’s true, some cartoons do cause violence!”

While in the 1990s, I enjoyed “The Amendment Song” as the campy throwback to my childhood, over the years, I think it’s turned into one of the darkest pieces of political satire ever to appear on a broadcast network.