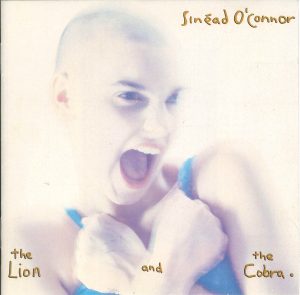 Sinéad O’Connor’s debut album, The Lion and The Cobra, had a long and difficult gestation period. And not just because she got pregnant by her drummer, John Reynolds, during the recording of it, freaking up her record company.

The problem was that she hated the sound her producer was getting, and ended up firing him after six months, meaning that somewhere there are alternate versions of these songs that you are never going to hear. And so, Sinéad took up the production reins herself, and while it came out a year after she started it, The Lion and The Cobra was exactly the album she wanted.

Which meant, musically, The Lion and the Cobra was all over the place: big gothic power ballads, funky dance-pop, slow dirges and straight-up rock songs. Naturally, one of those was my favorite song on the album: “Mandinka,” — a reference from Alex Haley’s Roots — which kicked off with big power chords over a danceable beat, and a crazy catchy chorus in which she shows off her considerable vocal chops.

There’s a lot of great singing here: even before she gets to the actual words, Sinéad is letting out a wordless whine, which is echoed by the way her voice breaks as she sings “I cannnnnnnnn’t” as an unearthly wail before holding out “flaaaaaaaaaammmmmmme” before singing the rest of the chorus relatively straight. Relatively.

I also love the music on the chorus: a totally unique mix of guitars, drums and a weird swishing percussion noise that cuts across the whole thing, but as always, you’re drawn to that voice “I dooooooooo knooooooooooow Mannnnnnnnn-din-kaaaaaaaaaaaa” which she takes full advantage of in the last third of the song, randomly playing around with the words like “I do know-ho-ho-ho-ho-oh-oh-oh” as the rest of the song swirls around her.

“Mandinka” was a smash hit in Ireland — making #6 — and also cracked the U.K. top 20. In the U.S., a remix of made it to #17 on the Billboard Dance Charts in 1988, and in fact the whole album got a lot of airplay on College Radio, as you can imagine. And The Lion and The Cobra was critically acclaimed everywhere, made it to #36 on the Billboard Charts, and eventually went gold, though I imagine that was in the wake of her massive success a couple of years later.