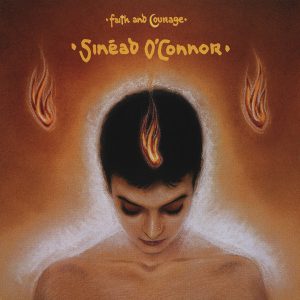 As much as I loved I Do Not Want What I Haven’t Got, it was 10 long years before I connected with another Sinéad O’Connor song, much less album. Which, given how personal her music is, I’m perfectly willing to blame on me. That said, there was never any chance I was going to love, much less like the follow-up, Am I Not Your Girl?

I know, I know: I really do love her voice, and I’ve doubt I’d be wrong when I say I’d end up enjoying her singing the phone book, but that’s totally different from enjoying her singing jazz and big-band standards, a form of music I’ve just never enjoyed. And so, it wasn’t until 1994’s Universal Mother she had a true follow-up, a record that was fine, as was 1997’s Gospel Oak EP. But neither of them had a song that just killed me, not even her cover of “All Apologies.”

And so, fast-forward to 2000’s Faith and Courage, which was pretty good, and — most importantly for a project like this, had my favorite Sinéad song in a very long time, the autobiographical “Daddy I’m Fine.”

A co-write with former-Eurythmic David A Stewart, “Daddy I’m Fine” is lyrically a flashback to when Sinéad first left Dublin for London to try and make her life as a musician. It starts off with a shuffling late-period Clash beat and soft keyboard notes as Sinéad sets the scene.

And then, as a guitar comes in playing crunchy sustained chords, the pre-chorus explains her strategy for becoming that big star.

And whether or not it’s all a performance, since she’s basically singing about being performatively sexy, she actually does sound incredibly sexy during these parts of the song — which might just be her low harmony with herself which just lead to the the chorus. In her 2021 autobiography, Rememberings: Scenes From My Complicated Life — which she delayed just so I’d have time to read it before writing these posts — Sinéad says she loves performing it live because “you just get to yell and scream” it’s no doubt this part she’s talking about.

After she sings “make you feel all right,” there kind of a pause, and then a synth moan kickstarts the drum machine into “punk rock” mode and the guitars follow suit, while multiple overdubbed Sinéads all scream the lyrics on top of each other.

I love the way all of the overdubs all collide on “singer” and just how much fun she’s having singing this song: both proud of and a little scared of they younger self she’s singing about, even as she reiterates it on the next verse & pre-chorus, which has jumped forward in time a little bit.

I love the way her voice wraps around “strooonnnn independent Paaaagann woman siiinging” and love how the second iteration of the pre-chorus replaces “boobs up right” with “pride up right,” though it’s still sexy as shit, sorry.

And as we hit the last chorus, we’ve jumped fully into the future, it’s now the year 2000, and a lot of shit has happened in the interim. And yet still:

And honestly, its so fun and so upbeat, you absolutely believe her at the end when she brags “Daddy, I’m finnnnnnnnne” a few times and, as the song collapses around her declares “Daddy, I looovvve you.”

I loved “Daddy, I’m Fine” from the moment I heard it, attracted at first by the slow/fast song structure and the melody, and eventually the words and the singing. And while nothing else on Faith and Courage quite popped with me, I was just glad that I could still connect that hard with one of her songs.