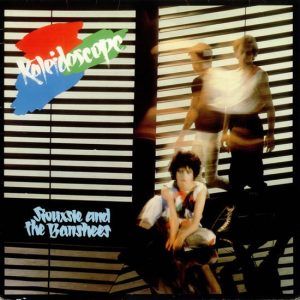 That line-up never recorded, though the bassist, Steven Severin, stuck with Siouxsie for the duration of Siouxsie and The Banshees, as did Budgie, the drummer who joined in 1980 for their album Kalediscope. Budgie & Severin had an instant lock as a rhythm section, and they drove many of Siouxsie’s greatest songs, like the psychedelic, swirling “Christine,” which rode around on a bed of acoustic guitars played by new guitarist John McGeogh.

Over all of this, Siouxsie sings about a real-life woman, Christine Sizemore, who had Dissociative Identity Disorder, causing her to manifest different personalities.

She tries not to shatter, kaleidoscope style
Personality changes behind her red smile
Every new problem brings a stranger inside
Helplessly forcing one more new disguise

“Christine” has a lot of psychedelic touches — keyboards and guitars and voices floating and out of the mix — but it’s all held down by Severin’s rumbling bass and Budgie’s steady backbeat, which occasionally doubles up, adding the the weirdness. Also anchoring the song: one of Siouxsie Sioux’s catchiest choruses.

With Siouxsie hitting it hard every time she sang “Christine,” that chorus was both dark and a total earworm. It, of course, didn’t really do anything in the U.S. — are you kidding? — but in the U.K. it was a big enough hit to help make Kaleidoscope their highest charting album ever, topping out at #5.