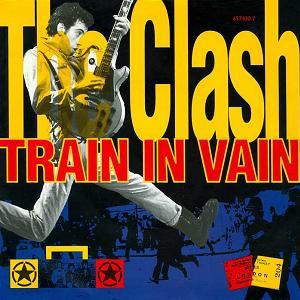 It started off with a kinda soul beat, and of course the “stand by me” in the lyrics echos the great Ben E. King song, but it otherwise didn’t really sound like soul. And it was too rough to be straight pop, despite the great hook and lovelorn lyrics. But while there were guitars and something that sounded like a harmonica, it wasn’t really rock either. Or disco, even though it was clearly danceable. So what the hell was it?

The answer, of course, was that “Train in Vain” was a melange of everything. The first flowering of what I can only call Clashmusic. Of course the The Clash had always sounded like no other band, but after London Calling they started writing songs that sounded like no other music. Not every song — cos that shit is hard — of course, but things like “The Call Up” or “Know Your Rights” weren’t really music that anybody else would think to make.

But before all that, sounding like nothing else in the entire world, “Train in Vain” made the U.S. Top 40 in 1980. In retrospect, that is awesome, though the time, I remember being somewhat ambivalent about the whole thing. It wasn’t so much that I cared about sharing my favorite band with the entire world — I’d been trying to share The Clash with the entire world since the moment I heard them — but rather I still had the version of The Clash as a strict hard rock band rolling around in my head, and I wasn’t quite ready to give that up.

On the other hand, the newfound popularity of The Clash meant that — for the next few years — they were everywhere. Which, of course, in the early 1980s meant pretty much only late-night TV shows, the rock press and MTV. But it was way better than nowhere.

My answer is no. I’ve played a lot over the past few days while writing these posts, and I’ve come to the conclusion that the first record is better than the second record, and side four desperately needs the final double whammy of “Revolution Rock” and “Train in Vain” to obfuscate that it starts with three of the weaker tracks. (Maybe someday I’ll like “Lovers Rock,” but today is not that day.)

Nevertheless, I kept playing side four in order to get to that moment where Joe adverts “weddings, parties, anything . . . and bongo jazz a speciality-ality-ty!” and the drumbeat for “Train in Vain” kicks in. And weirdly enough it needs that capper at the very end to bring everything together and point to the future. Maybe it was an accident, but London Calling was built on accidents, so how better to end it?

Meanwhile, 35 years later, “Train in Vain” stands as their greatest and most durable U.S. hit single. “I Fought The Law” was a cover, “Rock The Casbah” remains problematic, and “Should I Stay or Should I Go” is a fun novelty. But “Train in Vain” is forever. Jones’ heartfelt double-tracked vocals are on point, the lyrics smart in their depiction of heartbreak, and a melody that brings it every single time. I’m singing it as I’m writing these words.

Did “Train in Vain” stand by me? Oh totally.

Official video for “Train in Vain”