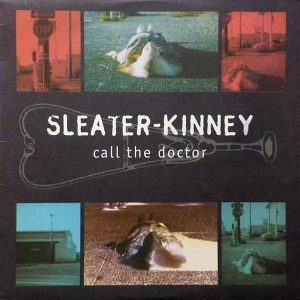 And, in fact, in her memoir Hunger Makes Me A Modern Girl, Carrie Brownstein talks about how “I Wanna Be Your Joey Ramone” was kind of a template for them, the first song where they were “in a band writing being in a band, singing about singing.” And while it was neither the first nor the last song inspired by the incredibly iconic Joey Ramone — who, you might remember, also wrote songs about Joey Ramone — it’s one of the best ones.

And while that chorus gender-flips the typical rock star/groupie equation (and runs into a weird oops in the second chorus when they replace “Joey Ramone” with the semi-cancelled “Thurston Moore”), what’s made it stand out for me were the vocals, where while Corin Tucker belts out the actual words, Carrie Brownstein — who sings the verses — screams out an atonal “wehoa! wehoa! “wehoa!” at the same time Tucker is hitting the “yeah, yeah, yeah, yeah” and the end result was like nothing I’d ever heard before.

And while “I Wanna Be Your Joey Ramone” is bereft of some of the guitar pyrotechnics that they’ll start deploying on later records, there’s more than enough vocal pyrotechnics to make up for it. And while it was one of the key reasons that Call The Doctor was the first of their records to end up in the top echelon of the Village Voice Pazz & Jop poll, where it landed at #3, the beginning of Sleater-Kinney’s reign as a quintessential critics band.

“I Wanna Be Your Joey Ramone”