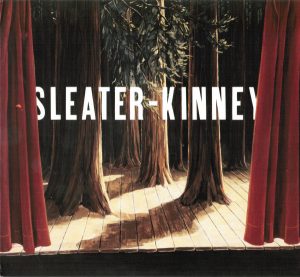 Recorded mostly live in the studio, The Woods got a few Zeppelin comparisons, but I hear more White Light White Heat, given all of the red-lined guitars and crazed distortion, which makes an appearance on the relatively calm “Modern Girl,” in which Carrie Brownstein and Corin Tucker’s guitars start by pleasantly frolicking with each other while Brownstein sings about domestic tranquility.

My baby loves me, I’m so happy
Happy makes me a modern girl
Took my money and bought a TV
TV brings me closer to the world

That said when she sings “my whole life was like a picture on a sunny day” in the first chorus, you might be trying to figure out if she’s being ironic, even as an organ with every key held down at once burbles in the background, and a harmonica — played by Janet Weiss — doubles her as she sings the second verse.

My baby loves me, I’m so hungry
Hunger makes me a modern girl
Took my money and bought a donut
The hole’s the size of this entire world

However, after the second chorus, Weiss comes in with a big stomping drum beat, the guitars go from frolicking to fisticuffs, and the entire tenor of the song changes.

My baby loves me, I’m so angry
Anger makes me a modern girl
Took my money, I couldn’t buy nothin’
I’m sick of this brave new world

At the end of the song, everything is louder than everything else, signifying — to an older white het-cis male like me — the contrasts and confusions of being a modern girl: that she could be happy, hungry and angry all at the same time makes a lot of sense from my standpoint. Meaning that there isn’t any irony in the song whatsoever.

Naturally, The Woods was the most successful Sleater-Kinney album to date: it naturally made #4 in the Village Voice’s Pazz & Jop Critics poll, #2 on Billboard’s indie chart and even #80 on their regular album chart. It was also the last album they would release in a decade, as they decided to take a hiatus: sometimes it’s hard to balance your passions as you get older, and the making of — and especially touring on — records now had more bad than good for the band.