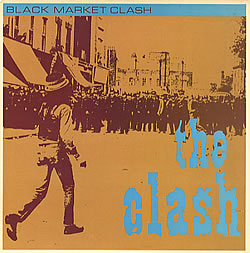 Strummer, of course, starts playing around with the lyrics — switching them around, breaking them down, tossing in his own interjections — making it his own. Oh, and Mick Jones comes up with an amazing loping guitar hook that somehow ties psychedelica with dub. On Black Market Clash, there is over 12 minutes of that guitar hook, and as it winds its way through not one, but two different dub versions, it nearly brings about armagideon all by itself.

“OK, OK, don’t push us when we’re HOT!” Strummer intones at some point in the proceedings, and for once, its an understatement.

Then there’s the amazing live version, captured on the otherwise disappointing From Here to Eternity. While Mick weaves that guitar hook in and out of Mickey Gallagher’s keyboard, Paul Simonon & Topper Headon lock into one of the most powerful grooves of their not exactly ungroovy career, and it completely complements both Mikey Dread’s toasting and Joe Strummer’s exhortations.