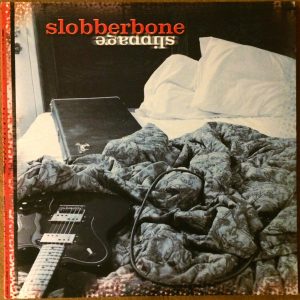 Not really sure how Slobberbone came across my radar, though I’m guessing that Drive-by Truckers might have had something to do with it, as Patterson Hood sang on “Lazy Guy” from their previous album, Everything You Thought Was Right Was Wrong Today. It’s also possible that I discovered that their A&R guy was Pete Jesperson, the founder of the immortal Twin/Tone records.

And so I bought 2002’s Slippage — which turned out to be their final album — and the song that utterly destroyed me was “Sweetness, That’s Your Cue,” a full-throated rock ‘n’ roll song that could have easily jumped off of my beloved Southern Rock Opera, except it had nothing to do with Lynyrd Skynyrd or the South, even if the opening verse references one of Skynyrd’s greatest songs.

What’s that smell you ask, I think I know
It’s the smoldering of expectations long let go
Would you suggest you might effect some change?
Or are you banking that one decent poke might stoke the flames
Is that your game?

It’s a breakup song, natch, but with lead guitarist Jess Barr tossing out wicked leads and drummer Tony Harper alternating doubling on his toms with his snare ever other bar or so, “Sweetness, That’s Your Cue” lurches backwards and forwards even as lead singer Brent Best snarls the long, catchy chorus.

And I know these things aren’t the same for you
But what gets me through is all I knew
And you can try but you won’t bust through
Still I won’t hold that against you
No, not against you

And when Best starts the next verse with “I am a sinking ship / I am listing” as Barr’s slide tries but fails to keep him afloat, it floors me every single time, as does Best doing the song’s chorus melody as the guitar solo — a move that I’ll never not love, of course.

Let’s put it this way: as much as I love digging deep into an artist’s ovure — which will start again with the very next post — the very essence of Certain Songs for me are these one-off songs that have otherwise slipped into the cracks of obscurity. So check out this song. And turn it up!


Sweetness, That’s Your Cue” live on the Late Late Show with Craig Kilborn, 2002