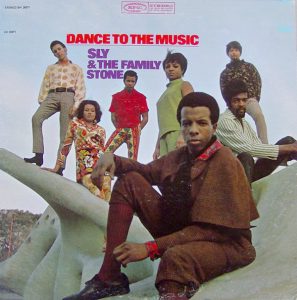 That certainly wasn’t the case with their second single, “Dance to The Music,” which was made and released under protest, as their meddling record execs wanted them to point their new thing towards commerciality. Thus, “Dance to The Music,” which had only a single message — initially screamed by trumpeter Cynthia Robinson — “dance to the music!” Which

It starts off the horn section of trumpeter Cynthia Robinson & saxophonist Jerry Martini riffing over drummer Gregg Errico’s stomping Motown beat followed by guitarist Freddie Stone and Robinson & Martini twisting guitar and trumpet licks around each other while Robinson gets our attention.

That’s followed immediately by just the singers sing “bum-bum-dah-dum-dum” and scat around each over just a tambourine after which they all sing “dance to the music” a few times after Errico re-ups the beat. And now it’s time for the band to explain themselves.

That starts with guitarist Freddie Stone:

All we need is a drummer
For people who only need a beat, yeah

And, of course, everybody drops out after “only need a beat” — listen closely, and you can hear them invoking the handclap rule — and after he introduces himself, Freddie Stone plays some psychedelic licks, and now here comes bassist Larry Graham.

And boom!! Some big-ass bass, over which it’s finally Sly’s turn:

And of course while Sly plays his organ solo, Freddie Stone introduces the horn section, allowing Cynthia and Jerry to play some licks, and after that, it’s back down to the scatting and climaxing with, well, you know.

Sure, while on a superficial level, “Dance to The Music” is barely even a song, on every single other level, it’s the sound of the revolution in music that Sly Stone envisioned. Oh, and it was as catchy and infectious as the Omicron variant. Released just as 1967 was ending, “Dance to The Music” was a massive smash in both the U.S. and the U.K, making it to #8 there and #7 there. Weirdly enough, “Dance To The Music” was their highest-charting single in the U.K., but in the U.S., they were just getting going.

“Dance to the Music”


“Dance to the Music” live on Soul Train