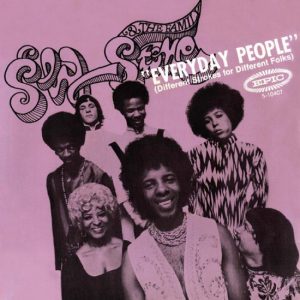 Sometimes I’m right and I can be wrong
My own beliefs are in my song
The butcher, the banker, the drummer and then
Makes no difference what group I’m in

I am everyday people
Yeah, Yeah


That’s Sly alone on the verse, joined by Freddie Stone, Larry Graham and Rose Stone on the chorus

“Everyday People” is also, of course, an incredibly simple song, driven by Sly’s piano, Gregg Errico’s incredibly straightforward drum — augmented by a cowbell on every beat — and the horns of Cynthia Robinson and Jerry Martini. But over this simplicity are hooky verses, hooky choruses, and a bridge so powerful that they do it three times, and is probably already ringing in your ears. (I originally wrote “ringing in your hair,” and that seems right, too.)

There is a blue one who can’t accept the green one
For living with a fat one, trying to be a skinny one
And different strokes for different folks
And so on and so on and scooby dooby doo-bee

As sung by Rose Stone over in one speaker, it has the sing-songy cadence of schoolyard taunts, but it also has one of the most gorgeous horn lines over in the other speaker, at first supporting Rose, but eventually succumbing to the melody, like all of us. After the first time around, Freddie Stone proclaims “we got to live together” and Sly runs with that theme for the second verse.

I am no better and neither are you
We are the same whatever we do
You love me, you hate me, you know me and then
You can’t figure out the bag I’m in

I am everyday people
Yeah, yeah

There is a long hair that doesn’t like the short hair
For being such a rich one, that will not help the poor one
And different strokes for different folks
And so on and so on and scooby dooby doo-bee

Sure, there is a little bit of hippie-dippie bullshit in all of this — I mean, it was 1968 — but I’ll take the grounded in the real world “different strokes for different folks” every time over, I dunno, “all you need is love” or “this is the dawning of the Age of Aquarius.” And I’ll take the horn line — which I’ll betcha Sly wrote — Robinson and Martini play every time over just about everything on the planet.

And speaking of hippie-dippie bullshit, I’m pretty sure I wondered if the “scooby dooby dooby” in the song had something to do with the cartoon dog whose TV show I loved to watch every Saturday morning.

“Everyday People” was, of course, Sly & The Family Stone’s first #1 hit single, topping both the Billboard Hot 100 and the R&B singles chart — though in the U.K., where their hippie-dippie bullshit didn’t cotton to anything that challenged their class system — it crapped out at #36. It has since become a standard, a reference point, and a time-honored classic.