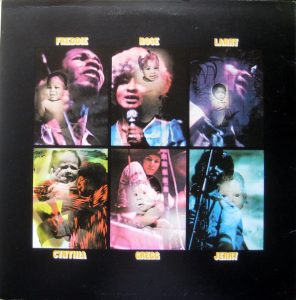 Pretty, pretty, pretty as a picture
Witty, witty, witty as you can be
Blind ’cause your eyes see only glitter
Closed to the things that make you free
Ever stop to think about a downfall?
Happens at the end of every line
Just when you think you’ve pulled a fast one
Happens to the foolish all the time

I’m not sure who Sly is addressing here, but it could almost be himself, especially when they all sing the chorus.

Naturally, there’s all sorts of great crazy detail in the lyric: sticking the guitar and bass in one speaker and the drums and horns in the other is prime late 60s, but it also means that every time you listen hard, you discover some cool new detail, like how the horns play around with the melody, or Sly’s organ burbling up and down in the mix, or how all of the lovely harmonies totally obscure the dark words.

At the time, “Somebody’s Watching You” probably seemed like a weird little diversion, a weird little paranoid moment in the middle of a mostly up and positive album. But now it seems like a precursor of the coke-fueled paranoia that dominated There’s A Riot Going On — yeah, I know, I say that as if it’s a bad thing — though it doesn’t really sound like that record. But we’ll talk about Riot soon enough, after we discuss the utter monster singles which preceded it.