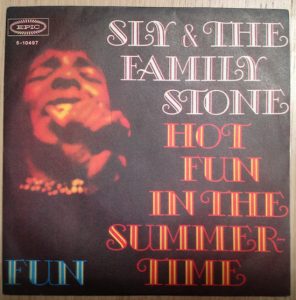 Maybe the reason that Sly & The Family Stone didn’t release “Somebody’s Watching You” as a single after “Stand!” didn’t crack the top 20 was that they’d already started working on their next album, and “Hot Fun in The Summertime” was the first taste of that record. But of course, that record never materialized, and “Hot Fun in the Summertime” (and the next two songs I’m writing about) all ended up on 1970’s Greatest Hits record.

A languid shuffle driven by Sly’s piano, “Hot Fun in the Summertime” was released just in time to be riding high in the charts when they played Woodstock in mid-August, though it wasn’t one of the songs they played at Woodstock, because of reasons, I guess? I mean, why

End of the spring and here she comes back
Hi, hi, hi, hi there

“Hot Fun in the Summertime” is a mood, and that mood is sitting on a beach somewhere, sipping or smoking your libation of choice, letting the day unfold the way it wants, without a care in the world.

Given the tumultuous state of the world in 1969, of course, it was all horseshit — and weirdly nostalgic, too — but at the same time, it was impossible not to be sucked into the hope that you could actually have hot fun in the summertime. It’s also impossible not to get sucked in by the vocals — the harmonies and the leads — the horns, the pianos, and the impossibly catchy melody line.

And so 50 years later, when I call it weirdly nostalgic, is that me being nostalgic for the great kid summers where I well and truly had hot fun in the summertime? Impossible to know, and I’m probably overthinking the whole thing. As usual.

ANYWAYS, whether the kids of 1969 took it as aspirational or as nostalgic or even as something they were currently experiencing, it didn’t really matter, because “Hot Fun in The Summertime” was an absolute smash, making it up to #2 on the Billboard charts and is now an eternal summer standard.

“Hot Fun in the Summertime”