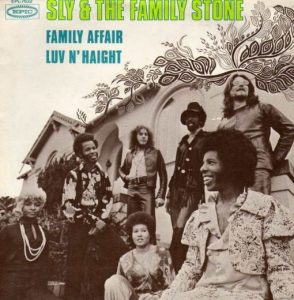 And of course, the first thing people heard again wasn’t yet another joyous multi-vocal, horn-driven anthem, but rather the insular paranoid “Family Affair,” on which Sly was the only Family Stone member to even play anything. He overdubbed bass, guitar and drum machine to to create a mysterious yet funky backdrop over which keyboardist Billy Preston and guitarist Bobby Womack swirled around.

Over all of this, Sly dueted with his sister Rose, woken up in the middle of the night to chant “it’s a family affair” over and over again, providing a hook for the ages, even though she didn’t even think it was anything but a scratch vocal.

The rest of the vocals were sung in a fucked-up gravelly world-weary voice by Sly, and his vocals matched the dark words.

Mom loves the both of them
You see, it’s in the blood
Both kids are good to mom
Blood’s thicker than the mud

And when they got to the chorus, both Rose’s muffled, muddy, tenuous and Sly’s growl said “we’ve already told you too much, so don’t bother asking for more.” And of course, it was always possible that the song was Sly’s take on relationships in the band itself, or even his own family members, but that seems more likely in retrospect, though calling the single “Family Affair” is at least a nod towards the song being about the affairs of Sly & The Family Stone.

The record-buying public of 1971 probably didn’t think too much of this: they were used to Sly & The Family Stone changing gears, and so this newer, darker direction clearly wasn’t off-putting. If anything, it felt right on the pulse of the nation, and “Family Affair” was Sly & The Family Stone’s third (and final) #1 hit single here in America, and — as Greil Marcus pointed out in Mystery Train — helped open the door for soul & funk to explore places it hadn’t quite gone before.