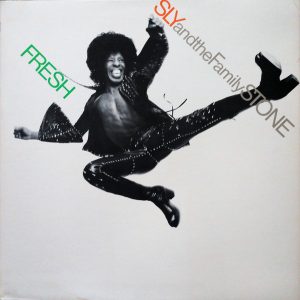 And this is where I came, kinda sorta.

I started listening hardcore to the radio in the spring of 1973, meaning that I ended up hearing “If You Want Me To Stay” a zillion times on 1300 KYNO-AM, and probably taped it off the radio, as well. And so, like a lot of the songs from that era, I know every single bit of it, and yet — because I was listening to it through shitty transistor radio speakers — can still discover nuances in it.

But even then, two things stood out: Sly’s near-manic vocals and that utterly insane bassline: one of the most fantastic bass parts to ever grace a Sly & The Family Stone song, which is really saying something.

So, ironically, I’m not 100% sure who played it. One thing for sure: it wasn’t Larry Graham, who had left the band. The wikipedia page for “If You Want Me to Stay” says it’s Sly — who just like he did with There’s A Riot Goin’ On — played the lion’s share of the instruments of Fresh. But the wikipedia page for Fresh says that the bass was played by Rusty (or Rustee) Allen. The liner notes on my CD copy of Fresh has the usual “everybody played their instruments, really” credits — but without any specific song-by-song listings — which were belied by the Sly-only album cover.

In any event, it’s a absolute monster, continually threatening to bubble right out of your speakers and onto your floor, eventually drowning you. Deep in the background, you can hear the horn section: the usual Cynthia Robinson on trumpet & Jerry Martini on sax, plus new saxist Pat Rizzo. New drummer Andy Newmark played a pretty skeletal beat, and Sly overdubbed the guitars, organ and piano, which popped in and out of the mix as needed.

But nothing was as loud as that bass and his vocals, as Sly told his girlfriend the terms and conditions for his staying. Gee, thanks Sly!

“If You Want Me To Stay” doesn’t really have a chorus — Sly has a lot of terms and conditions — but he does repeat a couple of verses, the key one being this:

While “If You Want Me To Stay” wasn’t as big of a single as its predecessors, it still made it to #12 on the pop charts, the last time Sly Stone — under any incarnation — broke the Top 30. After that, it was all downhill, and it doesn’t seem like any kind of comeback is in site, especially at this late date. Which shouldn’t blind us to his utter incandescent achievements, but I think it kinda does, as he doesn’t get the same respect as peers like James Brown and George Clinton — both of whom had long shapeshifting careers — or even his dead-before-their times predecessors Sam Cooke & Otis Redding.

“If You Want Me To Stay”


“If You Want Me To Stay” live


“If You Want Me to Stay” on Soul Train