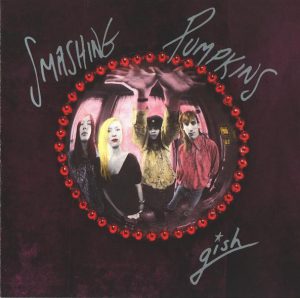 For reasons I don’t remember, the debut album by The Smashing Pumpkins, Gish, totally didn’t make my radar when it was initially released in 1991. I wasn’t alone: it barely grazed the Billboard top 200 albums charts, stalling at 195.

Instead, I picked it up in late 1992 or early 1993, having become Pumpkins-curious based their track on the Singles soundtrack, “Drown,” about more which tomorrow.

I liked, but I didn’t love Gish. It was clear that The Smashing Pumpkins — still presented as a democratic band — were taking the concept of filtering 1970s heavy rock through a punk lens in the same way the grunge bands were, but the difference was that the guitars were often bright and shiny, not heavy and muddy. And the song structures were kinda proggy, to boot, not just quietloudquiet, but slowfastslow, with parts of the songs smooshed against each other in surprising ways.

When it all worked, like on “Rhinoceros,” you could see they might have a future, if singer/songwriter/guitarist Billy Corgan could put it all together for a full album (foreshadowing!).

And so “Rhinoceros” twisted and turned its way through the quiet parts with Corgan’s and James Iha’s guitars sparking and shimmering over D’arcy Wretskys rubbery basslines, gradually picking up heft and noise, as driven by merciless drummer Jimmy Chamberlain.

And drifting through all of it is the etherial chorus.

I never learned any of the other words to “Rhinoceros,” so I’m not really clear as to what she knows; all of the guitars — especially during the final chorus when all hell breaks loose — just made me glad that she knew.