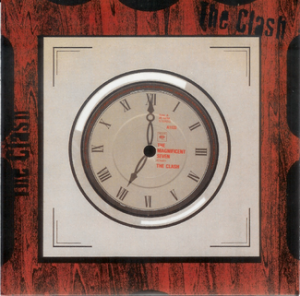 What happens when your favorite current band changes everything? If you’re lucky, you’ll get to answer this question more than once in your life. But as a hard rock loving newly-minted adult (legally only, emotionally years and years later) (maybe), “The Magnificent Seven” felt like a slap in the face.

I mean this was the band that did “Safe European Home?” While 1978 was only two years prior, it suddenly felt like light years away — and why not: The Clash had packed other artists entire careers into just two albums. Still, my thinking was that Rap was simply a passing fad. The last gasp of Disco with some (admittedly) clever rhymes on top. But did it rock? No! Rock ‘n’ roll forever dude!!

Sigh. I’m not proud of any of this, of course, but I got better. And Sandinista! definitely played a role in that. I mean, if rap was good enough for The Clash, who was I to be a fucking snob about it?

Of course the beauty of Sandinista! has always been that if you didn’t like what they were playing at any given time, just wait a few minutes and they’ll be playing something else. It was an album tailor-made to end up in pieces on the eight zillion Clash compilation tapes I made over the years. And at some point in the 1980s, as Rap stubbornly turned out not to be a fad after all, I realized how fucking awesome it — and by extension — “The Magnificent Seven” truly is.

Invoking The Handclap Rule from the very start, with a prominent Simonon bassline and Mick Jones dancing in the studio as he stabs at his guitar, I now wonder how I could have never not loved this song. Especially when considering even a small subset of the torrent of words coming from St. Joe Strummer:

Luther King and Mahatma Gandhi
Went to the park to check on the game
But they was murdered by the other team
Who went on to win 50-nil
You can be true, you can be false
You be given the same reward
Socrates and Milhous Nixon
Both went the same way – through the kitchen
Plato the Greek or Rin Tin Tin
Who’s more famous to the billion millions?

Then of course, there’s the instantly memorable call-and-response chorus, which was the first part of the song that I truly loved.

It’s a brilliant chorus, of course, because it can be interpreted as either The Man oppressing the workers by trying to squeeze every drop from them or The Clash exhorting their fans to do everything they can to rise above their circumstances.

As it turned out, The Clash’s rap songs might not have been as powerful as their reggae songs — cultural appropriation is easier when that culture has a longer history — but they were equally as legit. Or so it now seems to middle-aged white guy me, who is now glad that The Clash helped turn him on to both reggae and hip-hop, simply because they were a band that he would follow anywhere.

“The Magnificent Seven” performed live on Tomorrow With Tom Snyder, 1981