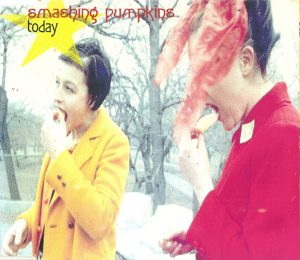 Given the near-30 years of craziness that followed it, nowadays Siamese Dream seems even more like a miracle, practically dropping out of nowhere during the summer of 1993 to join Last Splash and Exile in Guyville in dominating the back half of that year for me.

A perfect example is today’s song, “Today,” which starts out with a tiny underwater liquid wire hook which is then joined by a shit-ton of loud guitars which buoy it to the top before the bottom all drops out and Billy Corgan can open with the chorus.

“Today” is a song about wanting to kill yourself: after the relative failure of Gish, Corgan was experiencing depression and writer’s block, and “Today” was the first song he wrote for Siamese Dream. Write what you know, right?

Or for that matter, ignored everything else but Jimmy Chamberlain’s monster drum part, as he seamlessly transitions from the loud parts to the quiet parts, and then just kills it on the bridge, as Corgan confesses what’s causing the suicidal thoughts in the first place.

Chamberlain’s extra snare beats that turn into builds are utterly magnificent to the point where you might even ignore that Corgan is stealing from the Beatles here, especially since it goes into one last loud iteration of the chorus, this time with the ringing guitar hook from the opening singing harmonies.

“Today” was the second single from Siamese Dream, despite the fact that the record company wanted it to be the lead single. Instead, Corgan went with “Cherub Rock” — a song about giving in to the record company — as the lead single. Both songs did extremely well on alt-rock radio: “Cherub Rock” went to #7 and “Today” went to number #4, and remained alt-rock radio staples for years and years and years.