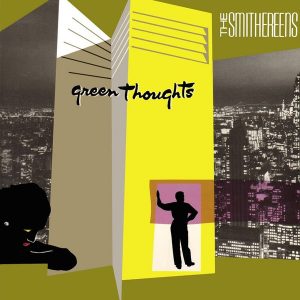 The Smithereens were a prime example of a band that I should have loved a lot more than I did. Specializing in riff-driven power-pop with big hooks, they should have been right up my ally. But they weren’t, even though I tried to get into them, I never did like one of the full-length albums from start to finish.

Which isn’t to say that there weren’t individual songs I liked: “Blood & Roses” stood out from their first LP, 1986’s Especially For You, “Only A Memory,” from 1988’s Green Thoughts, which topped the U.S. Mainstream chart; and 1989’s “Girl Like You,” which got away with being an AC/DC song in disguise.

But my favorite was “Drown in My Own Tears,” which was also from Green Thoughts and started with an absolute killer guitar riff that lead Smithereen Pat DiNuzio came up with at the soundcheck during their final show at the end of a 15-month tour. It’s an instantly hooky riff, and underpins DiNuzio’s lyrics about a relationship gone sour.

DiNuzio’s lead vocals are supported by ghostly backing vocals from the rest of the band — lead guitarist Jim Babjak, drummer Dennis Diken and bassist — not loud enough to be harmonies, and yet not quiet enough so you have to strain to hear them. It’s a pretty cool effect, hearing them stalk DiNuzio’s lead on the chorus.

It’s also cool when somebody shouts “1-2-3-4” before Babjak’s guitar solo, which comes ripping out of the center of the song and setting up the opening riff one last time.

“Drown in My Own Tears” was the third single from Green Thoughts, and only made one chart appearance, at #34 on the U.S. mainstream rock chart. The Smithereens also played Fresno — the Warnor’s I think — in support of their 1989 album, 11, but I didn’t seem them. Not because I didn’t want to, but because Sedan Delivery had a headlining gig at the Olympic Tavern that night. And in an acknowledgement that the Smithereens could potentially draw some audience from us, I had my brother John — who made our flyers at the time — put the image of actress Susan Berman taking a selfie from the film Smithereens on our flyer for the show. I wish I had that.

I lost track of the Smithereens after 11, though Wikipedia tells me they went on to make records well into the 2000s, though most of the final ones were covers of the Beatles, Tommy and Christmas songs. (Which means they put their version of “Christmas” on two different records, ha!). But like I said, I haven’t heard any of this music, so I can’t recommend anything.

Finally, lead Smithereen Pat DiNuzio died in 2017, at the very young age of 62, after which the other band members decided to carry on with guest vocalists, including folks like Marshall Crenshaw.

“Drown in My Own Tears”


“Drown in My Own Tears” Official Music Video