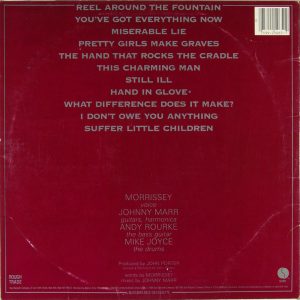 “Does the body rule the mind or does the mind rule the body? I dunno.”

“Still Ill” just might be my favorite Smiths song.

One of the reasons that it was good that Sire stuck “This Charming Man” onto the U.S. version of The Smiths is that after you flipped the record over at the end of “The Hand That Rocks The Cradle,” you get four straight unassailable bangers in a row, of which the bangingist was “Still Ill,” which is also probably the funniest song on The Smiths, to boot.

It’s also the the Smiths song that reminded me the most of their country cousins R.E.M., whose debut, Murmur, was still spinning on my turntable on a ridiculously consistent basis.

“Still Ill” starts off with Johnny Marr & Andy Rourke muffling their strings as they slapped their instruments in the same cadence as Mike Joyce’s double backbeat, before veering off into their own directions as Morrissey comes in.

While Rourke joins Joyce in forming a rock-solid rhythm, Marr almost instantly starts playing liquid crystal notes that act like a second vocal line, winding in and out of Morrissey’s voice, providing commentary all the way. I especially love the repeated honking notes that accompany “old dreams anymore” as they all slink to one of my very very very favorite Morrissey lines.

Does the body rule the mind
Or does the mind rule the body?
I dunno…

Gentle reader, I love this so much, I named one of my Smiths compilation tapes “Does the Marr Rule The Morrissey or Does The Morrissey Rule The Marr?” Though in 1984, the answer for me was definitely Marr, because I didn’t realize that the shoulder-shrugging “I dunno” was as funny as I do now.

Like a lot of early Smiths songs, “Still Ill” is just a torrent of words. In the final verse, Morrissey encourages the object of his affection to ditch work and closes with him going on and on and on about still being ill moaning “oohhhh-ohhhhhhhhhh” with Marr right there at his side, offering succor and encouragement with a thousand points of guitar, each lick more awesome than the last, until they both end up in the same place, just in time for Marr, Rourke and Joyce to end the song the same scuffling way they started it.

“Still Ill” was one of the very last songs recorded for The Smiths, added to their setlist almost instantly, and was played live for the rest of their career, right up to the final time they played, in December, 1986. And in fact, the internet tells me that when we all saw them at the Greek Theater in Berkeley in 1986 (about which more in the future), “Still Ill” was the opening song.