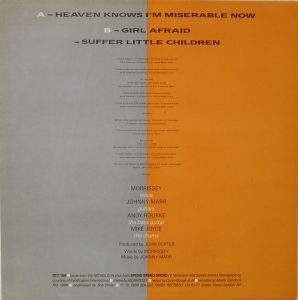 He never really looks at me

It was the ambition of the Smiths to be both a great singles band and a great album band, and part of that ambition was that they put out singles on a regular basis where you might flip the record and find songs as good if not better than the A-side.

This, kids, was part of the fun of being a Smiths fan in the mid-1980s: every couple of months, a new single would just appear in the Tower import section when it wasn’t there the day before. And it would have two or three good-to-great songs on it that might or might not be on their next album. What a thrill this was! While some of the early punk bands did this — The Clash, sure, The Jam, absolutely; though fellow Mancunians the Buzzcocks were probably the key influence. But all of those bands were gone by the time The Smiths came around, and nobody else was really doing it: sure, the non-album b-side was a staple among many of my favorite bands — R.E.M., U2, Hüsker Dü — but not non-album A-sides. (Exception, U2’s “A Celebration,” which has largely been whitewashed from their history.)

And, of course, harkened back to the 1960s, when it was a common practice among the great British bands: which, ironically, is why the catalogs of those bands — especially The Beatles, The Rolling Stones and The Who — remain kind of a pain in the ass.

And speaking of common practices, it’s one of my practices in Certain Songs to list the album on which you can find whichever song I’m writing about. And of course, with very few exceptions — the live “Handsome Devil” b-side of “Hand in Glove” and the b-sides for Strangeways, Here We Come — all of the Smiths b-sides were collected either on 1984’s import-only Hatful of Hollow and/or 1987’s titanic Louder Than Bombs, but in the spirit of trying to invoke that thrill of discovery, I’m just going to put whether or not these non-album singles were a-sides or b-sides. I mean, if you’re reading this, you likely know which of those compilations a given song is on. (I know nothing about the endless posthumous records, other than they’re probably full of great songs in all kinds of weird combinations.)

Anyways, before The Smiths had even been released, Johnny Marr had already written the music for sides of their their next single, “Heaven Knows I’m Miserable Now.” Which I’ve always been ambivalent about: there is some absolutely wonderful Johnny Marr guitar, and even some great Morrissey lines — in retrospect, the “found a job” verse is pretty funny, as is “Caligula would have blushed,” but overall, it’s always been too much on the complainy side for me. And the melody didn’t quite do it for me, either. It was also a great dividing line for the haters, who found in it their final proof that Morrissey was whinging ponce, and that was that. In Miserable Ole England, where they love their whinging ponces, it was their biggest hit, topping out at #10.

Much more to my taste was the b-side, “Girl Afraid,” which was basically an instrumental with two verses stuck in between. For nearly a minute, Marr is jangling about a half-dozen guitars playing a twisty turny doubling back on itself riff, while Andy Rourke is playing a muscular bassline and Mike Joyce is having fun with the double backbeat. Eventually, Morrissey deigns to poke his head in, looking at a relationship that is sputtering before it even starts.

I love Marr’s overdub counterpoint on “he never really looks at me” which add an extra bit of emotion to the whole proceedings, even if as after the verse is over, he’s back to the same repeating riff he used in the opening as a ghostly Morrissey repeats “I’ll never make that mistake again” as the band continue to ride endlessly on the main riff. In a weird way, “Girl Afraid” is the exact opposite of songs like “You’ve Got Everything Now” that are just a torrent of singing. In this case he had two verses, and he only felt like singing them each once.

And just like that, “Girl Afraid” ends. A couple of years later, a girl I liked and who liked me would reference this song as we were trying to figure out if we were going to get together, and while I don’t remember the exact circumstance under which she referenced it, it stung enough that I remember it all these years later.