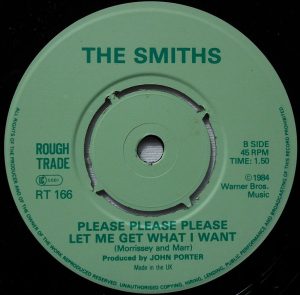 “For once in my life let me get what I want”

Once, in the summer of 1986, I called in sick to the Video Zone when I wasn’t really sick — sorry about that, Susan! — in order to attend a matinee of Ferris Bueller’s Day Off, the latest in that ridiculous series of John Hughes films that were mandatory viewing for anybody who was even remotely young in the mid-1980s.

At the tender age of 23, I considered myself one of those youths, even if I’d now been out of high school for six years — and what the hell, Matthew Broderick, who starred in the film was eight months older that I was. Still is, I guess.

In any event, while most of Ferris Bueller’s Day Off is gag after gag as Ferris, his best friend Cameron and his girlfriend Sloane spend an extremely fast-paced day in Chicago, there is an oasis of calm in the middle of the movie when they wander around the Art Institute of Chicago to an instrumental version of “Please, Please, Please, Let Me Get What I Want.”

I have to assume y’all have seen the film and remember the scene, and I’ll further posit this is this is the context where the vast vast majority of people have heard this song. Of course, because Hughes had already used the original on the soundtrack for Pretty in Pink (though I have no idea if it was in the film, because I’ve only seen it once or twice because I hated that Molly Ringwald made the wrong choice in the end), for Ferris Bueller’s Day Off he used the instrumental from Dream Academy’s cover of it, which was fine, but nowhere close to the original.

“Please, Please, Please, Let Me Get What I Want” is an incredibly sparse song: the opening is mostly just Marr on an acoustic guitar and Morrissey’s voice. There might be a tambourine for a beat, and maybe a bass, but it’s really not a full band recording in the sense that their other songs had been.

There’s some billowing guitar from Marr and a quick little lead, but other than that, the song remains incredibly unadorned as they go into the second verse, not quite the same as the first.

After that, comes a very long mandolin solo — which I’ve always assumed was played by Johnny Marr, confirmed by him in his autobiography, but at least one source claims was played by producer John Porter — that you might assume is just there to set up a final verse, but instead takes this incredibly short song to its ending.

So, two short verses, one long mandolin solo, and that’s pretty much it. But “Please, Please, Please Let Me Get What I Want” was one of those Smiths songs that struck a universal chord, and it remains one of their most-covered and most streamed songs, as well as one of the few songs they compiled on both Hatful of Hollow and Louder Than Bombs.