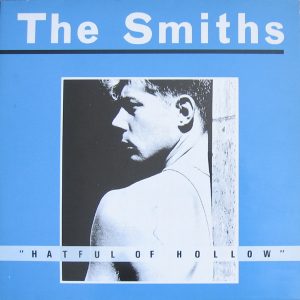 “There’s more to life than books, you know”

Released on my 22nd birthday, 1984’s U.K.-only Hatful of Hollow was a weird beast: a mishmash of singles and radio recordings, seemingly thrown together with no regard for chronology or musical compatibility or anything else. And given the fact that they released Meat is Murder just three months later, the timing seems strange as well.

Of course, none of that matters now, and none of that mattered then, given that Hatful of Hollow collected 16 recordings of the Smiths that had previously not been issued on long-playing record, and in fact, it only contained six songs from The Smiths were duplicated: five BBC sessions and the original “Hand in Glove” single with the fade in/fade out. This was all Morrissey’s idea, because he’d grown to dislike many of the performances on The Smiths, and he wanted to give something to the fans.

That said, if you were any kind of Smiths collector, you were familiar with the vast majority of the songs, if not all of the performances, making Hatful of Hollow more of an album where I grabbed songs for compilation tapes than something I listened to from start to finish. Though I can absolutely remember going to an early party of our burgeoning Fresno scene where Hatful of Hollow was the entertainment of the evening, with everyone marveling that it even existed at all.

Though it did reveal something about The Smiths: they took their BBC sessions seriously enough that if they got a performance they liked from those sessions, they would stick it on a record right next to a song that had been a full studio production with tons and tons of overdubs. Which is how the very very early recording “Handsome Devil” ended up following “How Soon is Now?” on the album, an almost whiplash-inducing juxtaposition of songs.

As we discussed yesterday, “How Soon Is Now?” used state-of-the art production techniques to create its unique shimmer, whereas “Handsome Devil” is all heat and flash, one of the earliest Morrissey & Marr songs, and features some of the most explicit lyrics Morrissey ever wrote.

This is accompanied by music moving at punk speed, Mike Joyce and Andy Rourke barely keeping up with Johnny Marr, who is playing a repeating sequence of notes as fast as he possibly could, creating an aura of utter frenetic need, only laying off slightly to jangle around the chorus.

Let me get my hands
On your mammary glands
And let me get your head
On the conjugal bed
I say, I say, I say

Well now. I do declare! Can somebody turn up the A/C? As the song progresses, he references the Velvets’ “Venus in Furs” with “I crack the whip / and you skip” and the even more explicit next verse:

It’s weird to see Morrissey this enthusiastic about sex, of course, gleefully corrupting a college student. And in fact, “Handsome Devil” the b-side caused the first of many Smiths media kerfluffle when The Sun (of course) claimed it was about child molestation, forcing Morrissey to point out that it was “an adult understanding of quite intimate matters.” Though, since it was Morrissey, he could have almost been talking about himself in the last verse.

The Smiths recorded “Handsome Devil” on three separate occasions: the first time was live at the Hacienda in February, 1983, a recording that ended up as the b-side of “Hand in Glove.” They also recorded it that summer with Troy Tate. But the former lacked sound quality and the latter lacked punch. Which is why they put the BBC version on Hatful of Hollow: it absolutely glistened with breathless power. Which is probably why it was the second song they ever played live — after “The Hand That Rocks The Cradle” — and also stuck around in their setlists until 1985.