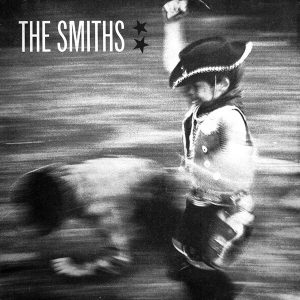 One thing I wasn’t expecting when I put my needle to the vinyl was the long, thrilling instrumental opening to “The Headmaster Ritual,” the lead-off track.

Starting off with Johnny Marr, Andy Rourke and Mike Joyce all hammering down on a staccato riff at the same time — like you’re catching them in mid-flight — and then as Marr spins a spidery weave of guitars, Joyce sneaks in a bunch of extra snarebeats and Andy Rourke splits the difference with a big rubbery bassline. It goes on and on, like Morrissey is enjoying what they’re doing so much he wants you to. So it’s nearly 45 seconds in before he starts singing.

And when he does, he pulls no punches whatsoever.

So, I have a confession to make: even though I had the lyric sheet right in front of me, I always thought he sang “belligerent goons,” as opposed to “belligerent ghouls,”. Either way, though, it’s still pretty damning, especially since “The Headmaster Ritual” was definitely an autobiographical song about a period of his life where heaven knew he was miserable then.

Interestingly enough, his vocal at this point is almost kind of mooted, matter-of-fact: this is just the way it was, and not even Johnny Marr’s dozen guitar overdubs adding extra hooks on that chorus was going to help him.

This part might not have been so autobiographical, as Morrissey had already said he never got hit, and he was apparently quite a good track & field athlete, as well. But whether or not it actually happened to him doesn’t detract from the fact that it happened all around him.

Also, this verse led to the one time Johnny Marr made any kind of suggestion about Morrissey’s lyrics, suggesting that it should be “bruises as big as dinner plates” instead of “bruises bigger than dinner plates”, which as you can imagine was politely accepted and subsequently ignored.

So far, so good, but it’s after the second chorus where “The Headmaster Ritual” reaches the stratosphere. After singing “I want to go home / I don’t want to stay” he then takes off with the band hammering down on that staccato riff again as Morrissey summons a wordless pained near-yodel, that I will transcribe as this:

And all of the pain he’d kept out of his vocals this far is suddenly unleashed. And it is fucking awesome — especially the gulped “hmmm-na-na-na-na” where his voice breaks and recovers. This might be my favorite Morrissey singing ever. And, of course, once he’s ratcheted up to this level, there’s no going back.

And so, we get a redo of the first verse, but with much more emotional and lyrical intensity. “Spineless swine / cemented minds” becomes “spineless baass-tards allllll” and “same old suit since nineteen sixty-two” becomes “same old joke since nineteen-two” and “give up education as a bad mistake” becomes “give up life as a bad mistake” (because of course it does.). It’s a textbook case of upping the stakes as the song goes on. (BTW, I originally wrote “upping the steaks,” but no way Morrissey does that, especially on this record.)

All of which leads to one last verse that should probably come with a trigger warning.

I want to go home
I don’t want to stay

After that, it’s back to “Na-na-na-na-na-na-eeee-yayy” for the rest of the song — chopped up and over-dubbed and echoed and spaced out and smashed up — almost like Morrissey figured that if Marr wasn’t going to do a solo, then he would. And it actually goes on longer than the voiceless intro do, well over a full minute of utterly gorgeous agony.

This, kids, is how you open your second album: a massive statement of musical and vocal power that is both unmistakable as you and totally groundbreaking at the same time. If the rest of Meat Is Murder didn’t really improve upon its opening track (outside of “How Soon is Now?” of course) that doesn’t mean there weren’t some great songs on it, but rather they just weren’t as great as this one.


“The Headmaster Ritual” as covered by Radiohead, 2007


“The Headmaster Ritual” by Johnny Marr live on KEXP, 2018