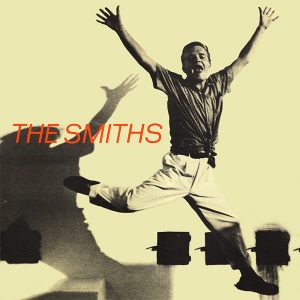 “A murderous desire for love”

And so after being inundated with Smiths music throughout all of 1984 and the first few months of 1985, the well dried up, as they embarked on four months of touring Europe and the U.S., the highlight of which was probably Johnny Marr and his long-time girlfriend (and still wife) Angie spontaneously getting married in San Francisco, as the chaos that engulfed them earlier in the year settled down to a manageable roar.

I didn’t see them on this tour, for reasons I can’t really remember, other than maybe that Tim was on London Semester, and I was pretty fucking broke that summer — though I did have enough money to go see R.E.M. in July, so who knows? — or maybe I couldn’t get tickets. Nor did I see The Smiths on the Live Aid broadcast in July (it was clearly a busy month), mostly because Bob Geldof didn’t invite them, because Morrissey had (correctly) said nasty things about “Do They Know It’s Christmas?”

All of this is a roundabout way of saying that it was nearly a half-year after the “Shakespeare’s Sister” session before The Smiths found themselves in the studio working up demos of new material. But they were so excited with the initial takes of “The Boy With The Thorn In His Side” they wanted to release the rough demo as the single. Cooler heads prevailed, but it was absolutely both a return to form and a beacon lighting the way for their next album — The Queen is Dead — on which it eventually ended up nearly a year later.

“The Boy With The Thorn in His Side” opens a trademark Johnny Marr fanfare, a jangled tumble of electric and acoustic guitars, building to a quick stoptime as Marr’s guitar announces, “now, here’s Morrissey:”

Morrissey has said that the “thorn” in this particular instance was “the music industry” because of course it was. Morrissey was eternally pissed that The Smiths’s singles didn’t do better in the U.K. top 40, despite at the same time not doing basic things like making videos. At this point, The Smiths were actively trying to get away from Rough Trade and sign with EMI, one of the majorest of major labels. Which Morrissey wouldn’t have liked any better, of course. I mean, c’mon, it’s like what Raylan Givens said: “if you run into an asshole in the morning, you ran into an asshole. If you run into assholes all day, you’re the asshole.”

None of which takes away from the true heartfelt pathos of his vocals on this song, which are some of his absolute best, utterly dripping with sincerity. Because he knows that the answer to his question will always be “no.”

Underneath this verse, Johnny Marr is playing chickenscratch guitar — his take on Nile Rodgers — buried underneath Mike Joyce’s hi-hat heavy drums, and a meaty Andy Rourke bassline. Oh, and — at least on the single version — a very audible marimba, as well as what sounded like synthetic strings (naughty!), so was probably the same keyboards used later on “There is A Light That Never Goes Out.”

All of this could have been a bit too much, but every time Marr’s guitar rose as Morrissey sang “oh-whooa-oh-oh-whooa-oh” leading back into the chorus, the gates of heavens opened and all the angels came out to play, especially in the end, as Morrissey essentially does a vocal solo, spinning “ohs” and “nos” around and around Marr’s glittering guitar. It’s easily one of Morrissey’s best moments on any Smiths record.

I played the fuck outta “The Boy With The Thorn in His Side” on KFSR, loving it more than anything they’d done — outside of “How Soon is Now?” and “The Headmaster Ritual” of course — in well over a year. That said, in the U.K., they still weren’t getting any love from the radio, and it stalled out at #23, despite having their first band-sanctioned video, a performance on Top of The Pops — Morrissey hated the original video so much that the Top of The Pops performance is now considered the official video, you can see why below — and two utterly killer b-sides, which we will be talking about in the next couple of days.

“The Boy With The Thorn in His Side”