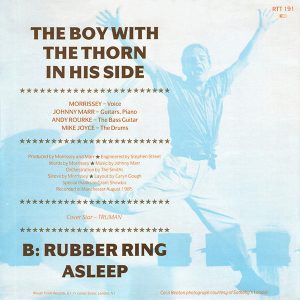 “And the songs that saved your life”

By late 1985, of course, you didn’t buy a Smiths single and only listen to the A-side: going all the way back to the very beginning, their singles had good to great b-sides: the live “Handsome Devil,” “Jeane,” “These Things Take Time,” “Girl Afraid,” and of course, the dynamic duo of “How Soon is Now?” and “Please, Please, Please, Let Me Get What I Want.”

And square in this tradition were the two b-sides of the 12″ of “The Boy With The Thorn in His Side:” “Rubber Ring” and “Asleep,” which somehow fit so well together that they ran into each other, connected by a creepy chant of “you are sleeping, you do not want to believe” taken from, well, the provenance is insanely obscure, so let’s just say that it’s a 1971 recording of a lady interpreting messages from the dead and leave it at that.

Before we get there, though, we still have the whole of “Rubber Ring” to contend with. “Rubber Ring” is one of the more experimental Smiths songs, and it opens with a sparse funkyish discourse between Johnny Marr & Andy Rourke, with Mike Joyce splitting the difference with his drum beat as Marr add a weird synthesized cello effect. Over this, Morrissey sings about, well, how music was so important to so many of us when we were young.

And then, with Mike Joyce switching up the beat into a rubbery bouncy groove, Marr plays one of the spidery tumbling parts where notes are tripping over each other, while Morrissey kinda does the same thing with his voice.

Then almost instantly, they tumble right back out, straight into the second verse, where Morrissey wonders about what happens when music isn’t the central feature of your life anymore. Is that even a thing? Obviously not for your humble correspondent, but he will stipulate that not everybody is as crazy as I am.

Obviously, as someone who made mixtapes with dramatic titles like “How The Replacements Saved My Life,” and is now writing an insane blog about remembering and celebrating my favorite songs, I kinda take this verse to heart, and point out that rubber ring can mean both vinyl record and life preserver.

There’s also a nice trick where the second chorus is just Marr doing his creepy crawling guitar, Morrissey sitting it out, probably marveling at the crazy shit he’s doing, or maybe even air-drumming with Mike Joyce’s cool little fills. OK, maybe not that last one.

Aw. Morrissey isn’t begrudging you growing up and your life getting better. Well, not that much, even if he asks “do you love me like you used to?” before jumping back into the chorus over and over and over. And the answer to your question, sir, is “the younger you, yes, but the older you, not so much.”

And as the outro continues — Morrissey singing “la da da dey,” Marr making spinning tops with his guitar and Rourke & Joyce keeping the bottom bottomed — in comes the voice of John Gielgud saying “everybody’s clever nowadays,” connecting Oscar Wilde and the Buzzcocks just before the creepy lady says “you are sleeping, you do not want to believe” as the wind and first note of the piano from “Asleep” creep in.

The greatest sin that the Smiths committed with Louder Than Bombs — even worse than including that godawful “Golden Lights” song — was splitting up “Rubber Ring” and “Asleep,” though I guess it makes it easier for me to write about them as separate entities when I shall forever think of them as two halves of the same song. But more on that tomorrow.