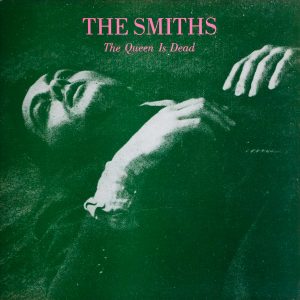 “The Queen is Dead” just might be my favorite Smiths song.

I can tell you this: just last week, Rox & I were watching Joel Coen’s The Tragedy of MacBeth — you know, the creepy spooky one with Denzel Washington & Francis McDormand — and at some point a functionary walks up to Denzel and says SPOILER ALERT! “The Queen, my Lord, is dead,” and the very first thing that came to my mind was “and it’s so lonely on a limb.”

So let’s set the scene: it’s June, 1986, and it has been nearly a year and a half since Meat is Murder. Sure, we’d had three excellent singles in that period, but still, expectations were pretty fucking high.

Which is why it’s hilarious that the first thing you hear is a few seconds of folks singing “take me back to dear old Blighty,” which was kind of a head-scratcher, but soon enough, a wail of feedback comes scorching out of the speakers, followed by an utterly ferocious Mike Joyce drum roll, and suddenly, at the crack of a wah-wah pedal, The Smiths just fucking explode all of the place, Morrissey moaning what sounds like “I don’t bless them” at the very height of his register before digging straight into one of his very very greatest lyrics.

I say Charles don’t you ever crave
To appear on the front of the Daily Mail
Dressed in your mother’s bridal veil?
(Oh, oh-oh, oh)

In 1985, The Velvet Underground released a outtakes collection called VU. And while it’s been subsumed into all of the other Velvets reissues over the years, rest assured, I thought was utterly revelatory, and called it “the 1985 version of Basement Tapes” in the Dead Air Diary.

Anyways, I was’t shocked at all recently to learn that it all affected Johnny Marr, who decided to do his take on Future Certain Song “I Can’t Stand It” as funneled through the MC5. As you do. But, of course, there was a shit ton of studio sophistication involved with “The Queen is Dead,” both planned and unplanned. Unplanned was the feedback that opens the song and permeates it: Marr had left his wah-wah pedal on, that feedback happened, and he put it over the basic track. Planned was the Mike Joyce drum roll that comes in soon after the feedback: it was basically a sample that helped them transition into the song proper.

Meanwhile, Morrissey — not content to simply posit a cross-dressing Charles splashed all over the tabloids — makes a couple of terrible discoveries.

Shook to the core by discovering he might be who he hates, Morrissey questions everything, as at the ripe old age of 25, he’s beginning to question his understanding of the world. Though, of course, the answer to “has the world changed or have I changed?” is always “yes.” I also love his voice breaking as he pronounces the word “were,” a weird foreshadowing of his freaking out at discovering that Andy Rourke was a heroin addict. Oh, and speaking of Andy Rourke, his bassline is one of the keyest of key pleasures of “The Queen is Dead,” as he rolls in and around Marr’s scratchy wah-wah driven rhythm and Mike Joyce’s roll-filled drums, clearly having his shit under control enough to keep bringing his A-game to the studio.

Oh, and then, things start getting weirder and wittier.

So I broke into the Palace
With a sponge and a rusty spanner
She said, “Eh, I know you, and you cannot sing”
I said, “That’s nothing, you should hear me play piano”

I always loved this verse, Morrissey facing his nemesis, who insults him to his face, which he then tops with the immortal dad joke, “that’s nothing, you should hear me play pianner”. (And, yeah, a very close listen makes it clear he’s pronouncing it “piano,” but fuck that.)

Morrissey, of course, is basing this quatrain on that episode of The Crown where a rando breaks into Buckingham Palace and has a nice long conversation with her Majesty before said rando is finally removed by a very abashed security.

And while the rest of the Smiths continue their bombs bursting in air all around him, Morrissey invites her (or maybe us) for a nice quiet walk, away from the rain — which flattens his hair, subsequently killing him — about love and law and poverty and precious things, before basically saying fuck that, she’s dead anyways, no better for us that booze and religion, and in fact he’s clearly becoming more unreliable every second, as his voice gets slowed down or lost in a tunnel of reverb.

At this point, Johnny Marr’s wah-wah starts taking the song over, bursting out of the mix as Morrissey chants “life is very long, when you’re lonely” over and over, but slightly differently each time, effects slowly taking over his voice, while a ghostly keyboard sidles in and out of the mix.

Finally, Morrissey just disappears and its down to Marr, Rourke and Joyce pushing as hard as they’ve ever pushed or ever will push for another minute and a half — and that was cut down by nearly a full minute by engineer Stephen Street — until it finally ends.

“The Queen is Dead” is a brutal, hilarious, psychedelic fever dream, and like “How Soon Is Now?” before it, absolutely expanded the horizons of what a Smiths song could be. I also think it might be one of those songs that even people who hate The Smiths have to at least grudgingly respect. And as an album opener, it sets you up to expect . . . well, basically pretty much anything.

“The Queen is Dead” was never a single or anything — can you even imagine? — but they did commission the filmmaker Derek Jarman to make a film of it as well as “There is A Light That Never Goes Out” and “Panic.” It’s all very Left of Reckoning.

“The Queen is Dead” A Film By Derek Jarman


“The Queen is Dead” live by Morrissey, Hollywood Bowl, 2007