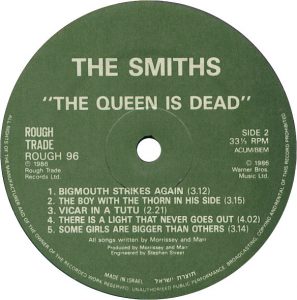 “From the Ice Age to the Dole Age”

And so after the epic drama of “There is A Light That Never Goes Out,” The Smiths choose to close The Queen is Dead with not something matching its grandeur, but rather one of their most frivolous songs, “Some Girls Are Bigger Than Others.” And it’s a perfect choice, as “Some Girls Are Bigger Than Others” is musically closer to classic Smiths than, say, “Frankly, Mr. Shankly” or “Vicar in a Tutu,” though the lyrics on both those songs are actually pretty great.

Engineer Stephen Street did a weird thing with “Some Girls Are Bigger Than Others:” it fades in, very loud, hot and bothered, and almost instantly fades out, like if you turned the volume all the way down, and then fades back up until it’s right in the sweet spot.

And while there are a couple of nice Andy Rourke bass blurps announcing the verses and Mike Joyce is all steady as she goes, sir, the true instrumental star of “Some Girls Are Bigger Than Others” is Johnny Marr, who jangles around his guitars and guitars around his jangles piling on hook after hook, which is good, because here is what Morrissey is singing.

From the ice age to the dole age
There is but one concern
I have just discovered:

Um, OK? The problem is, of course, is that it’s insanely catchy, and insanely catchy always wins out, especially with all of that great guitar. Though apparently Johnny Marr was pretty disappointed with the lyrics when he first heard them, hoping that all of the cool intricate guitar parts he put together would support lyrics slightly more philosophical than Morrissey realizing that breast sizes differed.

There is, of course, a second verse: “As Antony said to Cleopatra / As he opened a crate of ale / Oh, i say”, but I just discovered that there was also a third verse, left off of The Queen is Dead, that makes the song less ambiguous, and I would argue, less fun.

On the shop floor
There’s a calendar
As obvious as snow
As if we didn’t know!

In any event, Morrissey sang these lyrics during the only time “Some Girls Are Bigger Than Others” was ever played life, which happened to be The Smiths final show, in London as 1986 came crashing to an end. Of course, at the time, noone knew that it was going to be the final Smiths concert.

Either way, The Queen Is Dead is the definitive Smiths statement: a Britpop primer for the ages, and easily one of my top ten albums of the 1980s. And, of course, they weren’t finished, not by a long shot, as they almost instantly started issuing killer singles right and left.

“Some Girls Are Bigger Than Others”


“Some Girls Are Bigger Than Others” Live in London, 1986