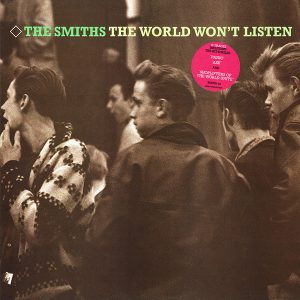 “You must suffer and cry for a longer time”

As 1987 dawned, Perhaps the best indication that things weren’t 100% well at Smiths HQ was the case of the dueling compilation albums.

The first one, The World Won’t Listen, was a pretty decent overview of the singles that the Smiths had released after Meat is Murder, but also included album cuts like “That Joke Isn’t Funny Anymore,” “Bigmouth Strikes Again” (which were at least singles) and “There Is A Light That Never Goes Out” (which wasn’t). And so, I dutifully went out and purchased it as an import at Tower.

And soon after that, I was totally blindsided by Louder Than Bombs, which came out a month later only in America and collected nearly everything that wasn’t on the U.S. versions of first three studio albums as well as the non-BBC sessions from Hatful of Hollow. And it included the entire “Sheila Take A Bow” single, which hadn’t yet been released in the U.K. So I had to buy that, too.

I mean, I didn’t have to, because money wasn’t exactly plentiful in 1987, but at the same time I kinda did, you know? In any event, the one unreleased song on The World Won’t Listen was the footstomping “You Just Haven’t Earned It Yet, Baby,” which was originally going to be The Smiths next single after “Ask,” but got shelved for “Shoplifters of the World Unite” after Johnny Marr got drunk and almost killed himself smashing his car into a wall, which ties Andy Rourke’s heroin addiction as the most rockstar moment of The Smiths.

Which sucks, because “You Just Haven’t Earned It, Baby” is a far superior song, a churning wall of guitars by Johnny Marr & Craig Gannon (this was recorded at the same session as “London“) and one of Morrissey’s angriest lyrics.

And then with Mike Joyce sliding into a double-time on his snare and the guitars switching up from churning to smashing, the chorus hits really hard, dark sarcasm dripping from every word.

“You Just Haven’t Earned It Yet, Baby” was apparently (or apocryphally) inspired from something Rough Trade’s owner Geoff Travis said when Morrissey complained about how The Smiths’ weren’t as big as he felt they should have been. Which may or may not be true, but either way it inspired this catchy and witty song, one of my absolute favorites from the post-The Queen Is Dead era.

“You Just Haven’t Earned It, Baby”