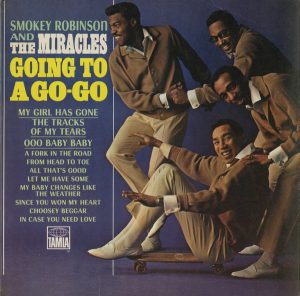 Well, after over a month of The Smiths, I’m just glad that we can move on to other music that isn’t about being sad and miserable, you know?

And so today, let’s talk about ::checks notes:: oh. Huh . . . welp, “Tracks of My Tears” by Smokey Robinson and The Miracles, which is all about being sad and miserable. Also, I just realized that the song that was immediately before the long Smiths run was “Drown in My Own Tears” by The Smithereens and not only did none of the Smiths songs have “tears” in the title, the only one I can remember that specifically talked about crying was “How Soon is Now?”

And then, as the full orchestral force of Motown kicks in, Smokey, with the Miracles adding harmonies and counterpoint, sublimely sings the chorus.

So take a good look at my face
You’ll see my smile looks out of place
If you look closer, it’s easy to trace
The tracks of my tears

This is followed by an awesome call-and-response:

And so it goes, another verse and chorus, all of which leads to the bridge, which goes from meandering to perfectly syncopated in the blink of an eye.

(Outside) I’m masquerading
(Inside) my hope is fading
Just a clown, oh yeah, since you put me down
My smile is my make up I wear since my break up with you

It goes without saying that the Funk Brothers totally nail every single beat of the stop-time at the end of that bridge, sending it all that much higher.

“Tracks of My Tears” didn’t chart as high as some of their previous singles did, stalling out at #16 on the Billboard Pop Charts, though it did make it to #2 on the R&B charts, and when it was re-released in the U.K. in 1969, made it all the way to #9 there. That said, its reputation has done nothing but grow over the decades, and now it’s regularly feted as one of Motown’s peaks, as well as one of the greatest songs ever recorded.

“The Tracks of My Tears”