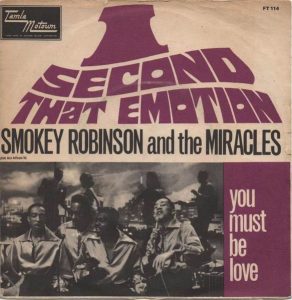 A plea to a — presumably — hot girl who is also a bit of a player, “I Second That Emotion” is Smokey laying down the line in favor of commitment as opposed to meaningless sex, as emphasized by the chorus, which features a very long melody line before getting to its kicker.

One of the things I like about “I Second That Emotion” is that it feels more Stax-like than Motown-like: the horns set up the song but don’t dominate it, the beat is sparse and funky, and there’s a lot of cool guitars floating around the edges. Even the horn solo is short and spare, mostly to give the song a tiniest bit of breathing room before they repeat the chorus at the end. I mean, if you compare to the Diana Ross & the Supremes and The Temptations (now there’s a shit-ton of contractual obligation) version that came out a couple of years later, you can see. That version is utterly drowning in strings, all of which are louder than lead singers Diana Ross and Eddie Kentrick, not to mention the rest of the Supremes and the Temptations.

That version wasn’t released here in the States, but it did make it to #18 in the U.K. in 1969, outcharting the original over there, which topped out at #27. However, the original version was a huge huge smash here, climbing to #4 on the Billboard charts.

In the early 1980s, the song got a second boost in both countries, as the U.K. new wave Japan cracked their top ten with a new wave remake, and the original was one of the highlights of the soundtrack of the Boomer-baiting The Big Chill , which was a pretty big deal in 1983.

“I Second That Emotion”


“I Second That Emotion” by Japan