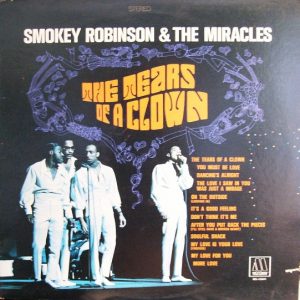 So a guy walks into a psychiatrist’s office and says to the psychiatrist, he sez: “Doc, I’ve been really really depressed lately. You see, my baby left me, and I just can’t keep from crying.”

And the psychiatrist says: “What you need is music. Music makes everybody happy. As it turns out, the great Motown group Smokey Robinson and The Miracles are in town tonight. You should go see them, as the lovely tenor voice of Smokey Robinson will do both your heart and your soul a world of good.”

At that, the guy bursts into tears and exclaims: “But Doctor, I am Smokey Robinson!”

You know how I know that Smokey Robinson & The Miracles’ “Tears of a Clown” is one of my top ten all-time favorite songs? The same reason that I know The Byrds “Eight Miles High” or The Shangri-Las’ “The Train From Kansas City” or New Order’s “Ceremony” are: the amazing cover versions that still don’t reach me the same way as the original.

And it doesn’t even matter if those covers are utterly world beating, like Hüsker Dü’s psychedelic thrash take on “Eight Miles High,” or Galaxie 500’s slowcore deconstruction of “Ceremony,” or even The (English) Beat’s joyous take of “Tears of a Clown.”

That’s because the 1970 single version of “Tears of A Clown” is a godsdamned miracle (pun intended) on just about every single level.

First off, do you know who one of the co-writers of “Tears of a Clown” is? Stevie Fucking Wonder. (I think that was his official name at the time). We’ll, of course, discuss Stevie Wonder a bunch more when we get there later this year or early next year, but he’d been writing songs from the very start, though his first single where he got a co-write was Future Certain Song “Uptight (Everything’s Alright)” in 1966.

Anyways, Wonder had put together the backing track with Motown producer Henry Cosby, and because they didn’t have any words, offered it to Smokey at the 1966 Motown Christmas Party. Smokey heard the calliope and bassoon opening and was inspired to write the lyrics.

Now if there’s a smile on my face
It’s only there tryin’ to fool the public
But when it comes down to foolin’ you
Now, honey, that’s quite a different subject (
But don’t let my glad expression
Give you the wrong impression

The music for this first verse has gone from the circus-like opening to a more dynamic Motown pulse, funky and driving, Smokey singing every single line with intensity as the rest of the Miracles come in with some backing “doo-doo-da-doos” as Smokey rips the killer couplet “But don’t let my glad expression / Give you the wrong impression”, as the Funk Brothers tear into one of the greatest pre-choruses ever recorded, an absolute explosion of stop-time drum rolls and counterpoint vocals.

It’s equal parts chaotic and gorgeous, and straightens itself out just in time for the kicker, delivered with the drums building and the Miracles “ooohs” in the background.

Smokey sings “the tears of a clown / when there’s noone around” as the calliope and bassoon make their re-entry, a slight bit of respite before the song starts back up, continuing its contrast of utterly joyful music and utterly miserable lyrics.

Now if I appear to be carefree
It’s only to camouflage my sadness
In order to shield my pride, I’ve tried
To cover this hurt with a show of gladness
But don’t let my show convince you
That I’ve been happy since you

One of the great things about “Tears of a Clown” is that’s continually switching things up while upping the ante. For example, in the first pre-chorus, all of the Miracles backing vocals were pre-figuring what Smokey was going to say next, but in the second one, they’re following him: all they can do now is react to his grief.

All of this sets up the immortal third verse, the key link between a 19th century Italian opera and a 21st century twitter meme. And even better, he’s already written the opening couplet in a previous song. But stealing from yourself is one of the grandest traditions in pop, especially because in this case, the context is everything.

The tears of a clown
When there’s no one around
Oh yeah, baby

Oh, and the rest of the Miracles adding insult to injury with their taunt of “the great pretender” just makes it kill that much harder.

After that, it’s the outro, with one last bit of genius counterpoint vocals as Smokey sums up the rest of the song, in case you hadn’t got the point yet.

This, ladies and gentlemen, is as perfect of a pop song as has ever been written and recorded. A fucking miracle. A happy accidental collision between two geniuses, and a song that I will never get sick and tired of. And yet, and yet, even though it was recorded in 1967, it wasn’t released as a single until 1970. Instead, it was stuck as the last song on Smokey Robinson & The Miracles Make It Happen album.

What happened was that, in 1969, Smokey Robinson had pretty much decided he didn’t want to tour anymore and wanted to focus on being a Motown Vice-President, which he also was, because he was Smokey Robinson. However, Motown U.K. had decided to resurrect this specific album cut as a single, and it went to #1 in the U.K., as it fucking well should. This prompted Motown to remix it (and maybe re-record the rhythm section) and issue it as a single here. Which also went to #1, because of that whole business of being one of the greatest pop singles ever recorded. It was the only #1 that The Miracles ever had with Smokey Robinson as their lead singer.

As far as your boy goes, I didn’t fall in love with it this hard until after I’d listened to The (English) Beat’s version of it a zillion times during that period where I Just Can’t Stop It was on my turntable constantly. At some point during the KFSR days, I went back to check out the original, and the utter dynamism of the arrangement, the pathos of the vocals and the razor-sharp lyrics killed me once and forever.

“The Tears of a Clown”