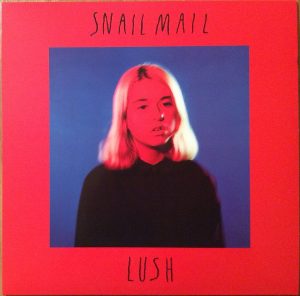 In the last half-decade or so, there was a microtrend of young female artists who got noticed by writing “songs” based around “guitars.” Some of them, like Phoebe Bridgers, made music under their own names, others like Lindsey Jordan, recorded under band names. Jordan records as “Snail Mail” a phrase that is older than she is. But, intentionally or not, ties her back to the 90s, when that was a new term.

And so on “Pristine,” the first single from the first Snail Mail album, Lush, Jordan’s slightly echoing guitar drives the song ever forward, as she’s singing about a love object who doesn’t necessarily love her back.

It just feels like
The same party every weekend
Doesn’t it? Doesn’t it?
And if you do find someone better
I’ll still see you in everything
For always, tomorrow, and all the time

Like a lot of the songs on Lush, “Pristine” is — as the kids say (or used to say, I’m not really sure anymore) — a mood: haunting and bittersweet, driven ever forward by her guitars, but not necessarily driven too fast, coming to a head on the chorus, which is bigger than the rest of the song, but doesn’t ever the break the mood.

There’s some great interplay here between Jordan, her drummer Ray Brown and her bassist Alex, um, Bass, as they get loud and quiet, stop and start on a dime, though it all comes back to her guitar playing, which is always inventive without ever being remotely flashy.

All of this was why Lush made nearly every critical top ten list when 2018 ended, and “Pristine” was often singled out as one of the key reasons.