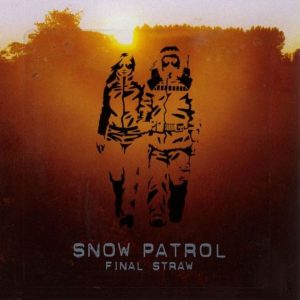 No, not that Snow Patrol song. That Snow Patrol song is called “Chasing Cars” and is objectively one of the most popular rock songs of the entire 21st century, having made it to #5 on the Billboard charts and into top tens all over the world. Also, it’s been played nearly a billion times on Spotify (OK, closer to 900,000,000 as of this writing, but still), and a couple of years ago was declared the most-played song on U.K. radio in the 21st century.

“Chasing Cars” is perfectly fine, and definitely the answer to the question “what if U2, but with a baritone vocalist?” But the Snow Patrol song I’ve always loved is 2003’s “Spitting Games,” which, uh, reminded me of R.E.M. if their singer were Irish.

“Spitting Games” opens with head Patroller Gary Lightbody singing “ooooooooh-oooooooooh” over ringing guitars and pounding drums, and then Lightbody deadpans the opening verse like there’s nothing wrong with what he’s singing about.

I broke into your house last night
And left a note at your bedside
I’m far too shy to speak to you at school
You leave me numb, and I’m not sure why

It’s not as if I need the extra weight
Confused enough by life, so thanks a lot
Lonely written words for company
Just raise the roof this once and follow me

You can tell the choruses because they pile on the harmonies, but also pile on the guitar: it’s a little bit springier and little bit tougher, and I find the whole sound of the song compelling and hypnotic, right through to the breakdown at the very end when it’s just Lightbody’s distorted voice and a guitar.

“Spitting Games” was the lead single from Snow Patrol’s 2003 album Final Straw, but it didn’t really do that well, topping out #54 in the U.K. Instead, it was the second single, the anthemic “Run” that made them stars there, making it all the way to #5 there and spurring the Final Straw album to #3 there. Naturally, they didn’t break here until “Chasing Cars.”

Oh, and Gary Lightbody ended up working the Peter Buck on a side project called Tired Pony, which might be coming up in this project a bit later.