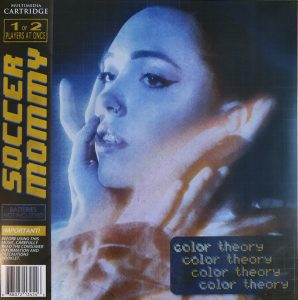 On Feburary 28, 2020, Soccer Mommy released the follow-up to 2018’s Clean, which was called Color Theory. This was literally the last possible time to release an album for at least the next two years (and, sigh, counting) and not have it affected in some way by the pandemic.

And in a weird way, that wasn’t even true, at least for me: working from home for these last two years (and, yay! counting) has meant that I didn’t have to listen to music through headphones, as I’d had to do for several years prior. (Except for that glorious glorious period at WME when I had my own office overlooking Sunset Blvd in Beverly Hills, which now seems like a weird dream.)

I don’t know if not listening through headphones really changed anything or not, outside of probably slowing down my inevitable and ongoing hearing decline, but it does mean that I processed new music somewhat differently, and Color Theory was one of the first records in quite some time to not be heard primarily through headphones.

In any event, the song from Color Theory that jumped out at me was “Lucy,” which, as it turned out, was one of the first songs recorded for the album (and the first single).

“Lucy” opened with a pair of chiming mysterioso guitars chiming against each other until Sophie Allison goes into the first verse.

So “Lucy” is short for “Lucifer,” as anybody who watched the TV show Lucifer in either its FOX or (much better) Netflix incarnations. I mean, it probably wasn’t directly inspired by the show, but it would have fit right in, for sure, especially on the chorus, which is catchy as fuck, especially with all of the dark guitars all around her.

This chorus connects “Lucy” directly to the grand tradition of songs about dealing with the Devil, going all the way back to Robert Johnson’s “Me And The Devil,” but probably even further. In the case of Sophie Allison, she’s in some deep deep shit.

Succumbing to evil
I thought I could never be
I look in the mirror
And the darkness looks back at me
I can’t help the feeling
That irks me, that I’m falling down
From Heaven through the earth
To hellfire to wear his crown

Yikes! And as she begs and pleads over and over with Lucy to quit taunting her, you get the impression that the taunting is just starting, and no amount of cool and dark guitar sounds are going to help her out. In fact, they’re probably having the opposite effect. Either way, “Lucy” is exactly the kind of song you want to have in your heavy rotation just as a (hopefully) once-in-a-lifetime pandemic rears its ugly maw. That said, I don’t really associate this specific song with the early days of the pandemic, because I’m not sure I really associate anything with the early days of the pandemic, except for the two weeks of rain in Los Angeles while everything was shutting down and stress-eating chocolate-covered espresso beans. Oh, and that might have been when we started watching Lucifer, as well.

Anyways, like 2018’s Clean, Color Theory was once again on a bunch of year-end best-of lists, but it also marked her debut on the Billboard album charts — at #142 — and another song on the album, “Circle The Drain” got enough actual radio play on AAA stations to make it to #18. My guess is that her next one will do even better.