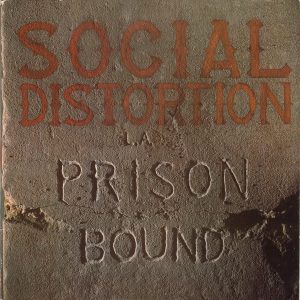 One of the things to know about Social Distortion: even though they recorded for nearly 30 years, they only produced seven albums during that period, with the three albums produced between 1988-1992 standing as their peak in terms of production.

This started early in their career, as they took an unheard-of five years between their debut Mommy’s Little Monster and the follow-up, Prison Bound. In terms of comparison, Hüsker Dü released six albums — two of them double albums — and an EP during that period, and then broke up, to boot.

In any event, the major reason that it took so long to get to their second album is that singer-songwriter-lead guitarist Mike Ness had to deal with kicking heroin, which of course derails every musician except for Keith Richards, and Ness is at the age (mine) where Keith’s addiction held some dark glamour for younger musicians.

Anyways, Ness kicked, put himself and his band back together and in 1988 they released Prison Bound, which was the blueprint for the rest of his career: punk rock as filtered by roots rock, or roots rock at punk speed and volume. Cowpunk, I guess, is what we called it at the time, though I think that Ness never quite fit that, as there was a lot of straightforward rock mixed in with the country beats.

And while the title track of Prison Bound was the one that got all of the attention — such as it was — at the time, my favorite track has always been “On My Nerves,” which also shows off Ness’s mostly undernoticed lead guitar chops.

And as such, “On My Nerves” opens with a long guitar solo over an midtempo riff that wouldn’t have been lost on, say, a Blue Öyster Cult album, which continues even after the song revs up into a proper punk speed, over which Ness lists all the things that get on his nerves.

Something’s gone wrong with my bike again
Can they play that song just one more fucking time?
That girl’s attitude is hurting my head
Where am I supposed to draw the line?

This is followed by yet another long guitar solo over the accelerated tempo, Ness squarely in the Chuck/Keef camp of soloing, and sets up the second set of verses, where he lists even more things that get on his nerves, with his lead guitar commenting on each and every one.

Someone scratched my favorite Stones LP
My boss says that I’m a little slow
These people, places and things just aren’t going my way
Situations that I can’t control

After that, the last two minutes are all guitar solos — really, the whole song is just one long guitar solo that also happens to have a litany of things that piss Ness off — including a return to the opening mid-tempo riff / punk speed-up motif, until “On My Nerves” just comes crashing to an end.