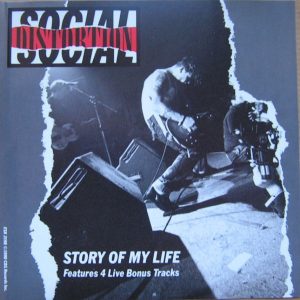 And so, in 1989, on the strength of Prison Bound, Social Distortion signed to Epic Records, who released 1990’s self-titled Social Distortion. Kids, don’t do this. You can name your first album after your band or yourself, but after that, no. Don’t do it. You’re not fooling anybody, OK? Sure, Peter Gabriel kinda sorta got away with it, but by the fourth album,

I mean, even the freaking Beatles tried to do it, and now everybody just refers to The Beatles as “The White Album.” I mean, honestly, a much better title for the album would have been Story of My Life, which is clever enough to leverage that phrase in two different ways and plainspoken enough for me to not even realize that fact until 30 years after I first heard it.

I mean, there isn’t anything new here, but cliches like “rock ‘n’ roll weekend” and “silly schoolboy crush” are cliches for a reason, and you never get the impression that singer-songwriter Mike Ness is even remotely being ironic. In fact, it’s the exact opposite: Ness gets by with an almost painful amount of sincerity, especially when they glide right into the chorus.

Life goes by so fast
You only want to do what you think is right
Close your eyes and then it’s past;
Story of my life

The music of “Story of My Life” is straightforward cowpunk, with drummer Christopher Reece and bassist John Maurer locking in nicely with Dennis Danell’s rhythm guitar. That’s also Maurer and Danell singing harmonies and doing the “ahhhhh” backing vocals in the chorus.

And, of course, there’s plenty of Mike Ness lead guitar throughout: licks, comments, solos, etc. All of which punctuate the verses about not being able to go home or find a good job and culminate in the end with Ness reflecting back on everything.

There is, of course, a certain amount of myth-making here, especially that whole “outlaw love song” bit. Is it a love song about outlaws? How does a love song get outlawed in the first place? And of course, none of that matters, because “Story of My Life” is so fun and so catchy that it steamrollers any kind of critical thought. It was also a relatively big hit on the radio and the MTV, though unlike some of the other singles from Social Distortion, it didn’t chart anywhere, so maybe it was just a big hit on my mixtapes. Story of my life.

“Story of My Life”