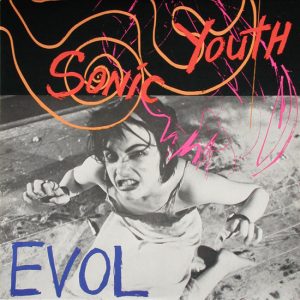 The final song on EVOL had three different titles. This kinda went along with fuckery where they listed the the songs on the back cover in a totally different order than they were actually on the record. And so, on that back cover, this song was listed as “Madonna, Sean and Me” and on the lyric sheet as “The Crucifixion of Sean Penn.”

A quick aside here: the Madonna/Sean Penn marriage clearly freaked up a lot of people — and not even the ones who paid their own money to sit thorough Shanghai Surprise — because beyond these references was also Lloyd Cole’s “Sean Penn Blues.”

Anyways, on the record label itself, the final song was listed as “Expressway to Yr. Skull,” which was actually in the lyrics, the first verse of which was sung by Thurston Moore over the usual towering guitars by Moore & Lee Ranaldo.

One of the things that most surprised me when I read Kim Gordon’s memoir was that she didn’t spring fully-formed as a NYC art-rocker, but prior to that, spent her teenage years as a quintessential California girl — albeit one who had an affinity for experimental music — though I doubt that really factored into the line “we’re gonna kill the California girls” line which was probably more for shock value as a reference to both the Beach Boys and their pal Charles Manson.

This leads into the catchiest chorus Sonic Youth had yet written, with the guitars moaning around every word.

That’s the last of the words, because after the third “expressway . . . to your skull” — a steal from a 1968 Buddy Miles album — the song suddenly explodes, as the guitars start trying to build that expressway themselves, finally petering themselves out and slowly fading away. And in fact the last half of the song is the guitars slowly coming apart and fading away. Even better, early pressings of the album set it up with one of those tricksy inner grooves so that the record never actually stopped, so the breakdown could last forever!!

In 1986, this angered me a bit: why waste half of a perfectly good song this way? Eventually, of course, I got it.

“Madonna, Sean and Me”