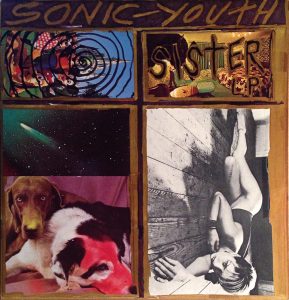 Of course when I say that Sister is the beginning of Sonic Youth’s great four-album run, it wasn’t anything I thought about in 1987, as I was still on the fence about Sonic Youth at that time. So much so that while I know Cindy & I drove down to see them and Firehose at the Scream in Los Angeles in September 1987, I didn’t even mention it in my journal, maybe because I thought I would remember all about it for the rest of my life? (Once again future Jim is hampered by past Jim’s weird method — or lack of method, really — of chronicling things). Though I did mention that we saw the Miss Alans that weekend, so priorities, I guess?

Anyways, I didn’t really go back and explore Sister & EVOL until the early 1990s, after Daydream Nation, Goo and Dirty all taught me how to properly listen to Sonic Youth’s music, and despite remembering “Schizophrenia” and “(I Got a) Catholic Block” from back in the day, the song that ignored in 1987 that really jumped out at me in 1993 was Thurston Moore’s “Tuff Gnarl.”

There really isn’t much momentum as Thurston Moore sings the opening verse over his had Lee Ranaldo’s guitars, but the guitars themselves sound loud and majestic and the words seem like they might mean something.

He’s running on a tuff gnarl in his head
He’s got a fatal erection home in bed
He’s really smart and he’s really fast
He’s got a hard tit, killer fuck in his past
Saints preserve us in hot young stuff
The saving grace is a sonic pig pile

But they really don’t: “Tuff Gnarl” was an exercise in Burroughsian cut-up technique. Thurston Moore took a bunch of reviews he’d written for a fanzine, cut them up, and rearranged them into the words for this song. (Which makes it even funnier when on Genius, folks who don’t know this try to create some meaning where there isn’t any.) Part of that though, is what drew me to this song: Moore’s singing on what passes to me as the chorus, as a hooky guitar echos him.

Moore sings these words with such passion and grandeur that they must mean something, right? Anyways, after a couple more verses, Moore concludes stops singing a little over a minute in with “let’s poke your eyes out.” And over the next two minutes, that’s exactly what they try to do, as the guitars start whirling like a drill headed straight for your eyes but that’s OK, it will settle for your forehead, or even your ears for that matter. Especially your ears, come to think of it.