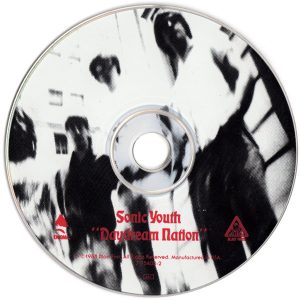 To the extent that I wear skirts and cheap nylon slips
I’ve gone native
I wanted to know the exact dimensions of hell
Does this sound simple? Fuck you!
Are you for sale?
Does “Fuck you” sound simple enough?
This was the only part that turned me on
But he was candy all over

Beyond the William Gibson reference in the title — which never shows up in the actual song, natch — in her memoir, Girl in a Band, Kim Gordon says that a post-apocalyptic Denis Johnson novel called Fiskadoro and her memories of growing up in Los Angeles also contributed to the words. No matter what, lines like “I wanted to know the exact dimensions of hell” and “Does ‘fuck you’ sound simple enough?” are utterly terrific lines, as is her singing on the chorus.

After the second chorus, there’s a wonderful long instrumental passage with the guitars of Lee Ranaldo & Thurston Moore utterly entwined and continually adding new licks and twists and turns as Shelley & Gordon push them ever forward, deeper and deeper into the sprawl, until at some point, Shelley just stops with the forward momentum, and entropy takes over, marking the second half of the song. This is all eerie guitars and bass, and even some percussion whooshes, all of which spend the next few minutes trying to find each other, find some reason to move forward, but instead, end up forever trapped in the Sprawl.