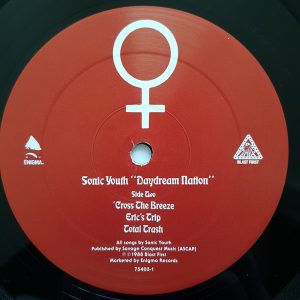 Like “Teen Age Riot,” there’s a short, gorgeously-picked dual guitar opening, Thurston Moore and Lee Ranaldo’s guitars creating a lovely tapestry that lasts for approximately 30 seconds. At which point, Moore turns his guitar into a bullet train with Lee Ranaldo supplying the bullets and Kim Gordon & Steve Shelley laying down the tracks.

Occasionally, just to break things up, Shelley switches from a double time to a half time, and then speeds things up even more, daring everybody to keep up with him, until eventually — 2:25 into the song — Kim Gordon starts singing.

Let’s go walkin’ on the water
Come all the way, please
I wanna know
Should I stay or go?

And so it goes in “Cross The Breeze,” verse after verse of Gordon singing things like “now you think I’m Satan’s daughter” and “I took a look into the hate”, with the third line of the verse always, “I wanna know” sometimes finished up with the Clash-reference “should I stay or go?” and sometimes not. And all the while, Lee Ranaldo is going wild with the lead guitar, adding flourishes and hooks and noise and commentary.

As tight and worked-out as the music is, the lyrics have a, well, breezy improvisatory quality to them, which creates a nice contrast to the music. After a couple of minutes of singing, Gordon signs off by muttering “burning ‘cross the breeze” a couple-three times and they all hop back on the bullet train for a bit, until it crashes into a wall where someone had painted a tunnel.

After that, they still have a couple of minutes of instrumental to go, but it’s more subdued, woozy and eventually resolves into the gorgeous guitar that opened the song.