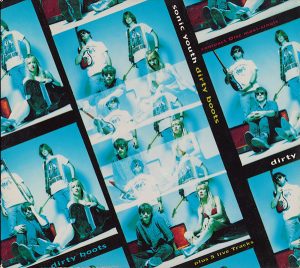 Of course, at the time, there might have been accusations of “selling out” or some shit, Sonic Youth signed to a major for two practical reasons: they wanted their music to be heard, and they wanted to be paid for making it. Their previous label, Enigma, had distribution issues, depressing the sales of Daydream Nation, and SST, their label for Sister and EVOL would send them royalty statements, but not so much the actual royalties.

So why not try with a major? In my mind, the issue was more of how they were going to follow up the album that was universally acclaimed as their masterpiece, which was the same issue the Replacements had with their major label debut, Tim. And, in my mind, they solved it in the same way: by making a record that utilized the bigger budget they now had, but was still light years away from being slick. And while Goo & Tim weren’t as great as their immediate predecessors, they were still better than just about everything else out there.

And so Goo opened with Thurston Moore’s life on the road song “Dirty Boots,” which faded in with feedback and an arcing guitar riff, as Steve Shelley shook a maraca rather than hitting a hi-hat — his version of an alternate tuning — and Moore instantly linked his new album to the previous one.

Here we go to another candle I know
All the girls, they’re playing on a jelly roll
Time to take a ride, time to take it in a midnight eye
And if you wanna go, get on below

“Dirty Boots” is a great album opener because it’s nearly all coiled menace for the first part of the song, both musically and lyrically. It’s also calm enough that it could initially be seen as a concession to a major label, but weird enough so that only the true indie believers would think that.

Then, a few minutes in, all of the tension breaks, and suddenly it’s release time: the drums pound harder, the guitars noise up and Moore goes from calm to crazy as he yells:

After which the guitars do the thing you’ve come to expect in a Sonic Youth song: scrape against each other while creating a soundscape equal parts glorious beauty and glorious noise before eventually breaking down and restarting the opening riff, which takes the song to its end.

“Dirty Boots” was released as the third single from Goo, but it didn’t get any airplay outside of College Radio, but as an album opener, it was aces.