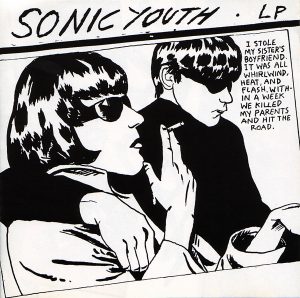 In her memoir, Girl in a Band, Gordon wrote about how she was attracted to the darkness that was clearly underneath the sunny pop that the Carpenters trafficked in, and that she felt that Karen Carpenter’s slowly starving herself to death was a reaction to the control that Richard Carpenter had over every other aspect of their lives.

Dreaming, dreaming of a girl like me
Hey, what are you waiting for? Feeding, feeding me?
I feel like I’m disappearing, getting smaller every day
But I look in the mirror and I’m bigger in every way

The music underneath Gordon’s voice was long and arcing, the guitars of Lee Ranaldo and Thurston Moore hammering the same notes over and over, whirlpools and whirlwinds of sound, as Gordon and Steve Shelley stopped and started the song seemingly at will as everybody crashed together for the stop-time chorus.

But my favorite parts of “Tunic (Song For Karen)” are the post-chorus sequences, where the beat kicks back in, the guitars almost jangle and the reverb on Kim’s voice goes from ghostly to delightful as she inhabits Karen Carpenter on top of the world, looking down on creation.

I’m in heaven now, I can see you Richard
Goodbye Hollywood, goodbye Downey, hello Janis
Hello Dennis, Elvis, and all my brand new friends
I’m so glad you’re all here with me, until the very end

That’s the first one, and what like I like about all of them is how free Karen Carpenter is, even while acknowledging the the pain her family caused her in the first place.

Hey mom, look I’m up here, I finally made it
I’m playing the drums again too
Don’t be sad, the band doesn’t sound half bad
And I remember mom, what you said
You said “Honey, you look so under-fed”

And after Gordon chants “Honey, you look so under-fed,” the rhythm section totally drops out, the guitars start falling apart, and spirits start chanting in the background, until just when you think it’s all over, Gordon & Shelley kick back in for one more round, which ends with one last taunt at her tormenters.

Goodbye Richard, gotta go now
I’m finally on my own, the band’s got a gig
Keep the love lights glowing, little girl’s got the blues
I can still hear mama say
“Honey, don’t let it go to your head”

Whew! If “Teen Age Riot” was the Sonic Youth song that turned my head in their direction, then “Tunic (Song For Karen)” is the song that made me want to have a relationship with them. It’s stunning in every way.