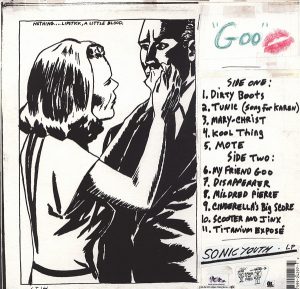 Which isn’t to say that 1989 Jim fully understood all of that when I read the Kim Gordon interviewing LL Cool J story in Spin, which at that point was my favorite Rock magazine. And so when Gordon asked LL what his favorite rock music was, he told her “Bon Jovi,” which disappointed her, and she kept trying to talk him out of it, asking about The Stooges & Jimi Hendrix.

But then again, why would she assume that LL was spending his days and nights listening to college radio, and Bon Jovi was well on their way to selling 46,000,000 copies of Slippery When Wet & New Jersey and were probably the biggest band in America — hell, even the world — at that time. So, in retrospect, it makes sense, especially given how aspirational LL always was.

In any event LL Cool J is both the subject and object of “Kool Thing” — though even in that opening verse things are more than what they seem, as Gordon throws in a “Helter Skelter” reference — which features fuzzy guitars from Lee Ranaldo & Thurston Moore which echo Gordon’s melody line for the verses. And the chorus features a lot of torrential drum rolls from Steve Shelley and a deliberate left from LL’s “Goin’ Back to Cali”

That said, I don’t think that “Kool Thing” is even remotely a flat-out attack on LL Cool J, especially during the breakdown, where they bring in Chuck D, which only happened because Public Enemy was recording Fear of a Black Planet — which, now that I think of it, holds the same place in the PE catalog that Goo holds in the SY catalog: the excellent follow-up to a groundbreaker — at the same time in the same studio and Chuck was always waiting around for Flavor Flav to show up. What a happy coincidence!

That said, a lot of people have always felt that there was a bit of a disconnection between Chuck’s exhortations and Kim’s spoken-word interludes.

(Yeah
Tell ’em about it
Hit ’em where it hurts)
Hey, Kool Thing, come here
Sit down beside me
There’s something I got to ask you
I just wanna know, what are you gonna do for me?
I mean, are you gonna liberate us girls
From male white corporate oppression?
(Tell it like it is)
Huh?
(Yeah)
Don’t be shy
(Worrrrrd up)
Fear (Fear) of (of) a (a) female (female) planet (planet)?
(Fear of a female planet)
(Fear, baby)
I just want to know that we can still be friends
(Let everybody know)
Come on, come on, come on, come on

My favorite parts of that are the way Kim spits out “Male. White. Corporate. Oppression.” because she already knows that ain’t going to happen. Maybe two out of those four. Maybe even three out of those four. But not all four. Not then. Not now. Not ever. Unfortunately.

My other favorite bit is when they both say “fear of a female planet” at the same time, which belies the interpretation that Chuck didn’t know or understand what he was contributing to. I honestly believe that he was having fun with the whole thing, and even taking the piss out of himself a bit. Hell, he was even in the video!

And this point the band takes off as Kim mutters “koool . . . thing” a few times, heading back into the song proper with a deadpan “When you’re a star, I know that you’ll fix everything,” maybe the funniest thing she ever wrote.

In any event, “Kool Thing” was a hit. I mean, on alternative radio, where it got to #7, though it did get up to #27 in Ireland, the only time Sonic Youth ever charted there, and was their first charting single in the U.K., making it to #81.