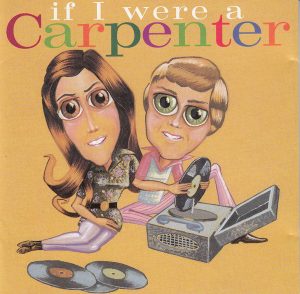 I have a theory which goes like this: popular stuff eventually ends up critically acclaimed, no matter how the critics treated it when it came out. That’s because young people who grow up to be critics are so sure that their tastes have been refined from the start, they assume that there must have been value in the stuff they loved as kids, and so figure out ways to argue that it’s also good, eventually shifting the critical consensus.

Thus, the shift in the reputations of — off the top of my head — The Monkees, ABBA, Duran Duran, maybe even Journey have shifted to the positive side of the scale. And I think that If I Were A Carpenter was kind of a shot at doing that with the Carpenters.

I’ll be honest: it didn’t work for me. I liked “Rainy Days and Mondays” when I was a kid, but “Sing” made its ascent just as I was getting full-on into AM radio, and I despised that song — especially that fucking children’s chorus — and most of the others I heard during their 1970-1975 imperial period. And with the exception of “Superstar,” I still do. That’s OK, I don’t have to like everything, and there was no doubt that Karen Carpenter was a tragic figure with a helluva voice.

Anyways, as sung by Thurston Moore, Sonic Youth’s “Superstar” was closer to the Carpenters version than the easy-rolling version that Delaney & Bonnie (it was a co-write by Bonnie Bramlett & Leon Russell) recorded with many of the folks who eventually became Derek & The Dominoes.

While the original version sidled into the chorus, the Carpenters version — recorded with the Wrecking Crew, natch loaded up the strings and horns, making the groupie’s dilemma at the heart of the song the biggest thing ever. Which, of course, it would have been.

Don’t you remember, you told me you loved me, baby?
You said you’d be coming back this way again, baby
Baby, baby, baby, baby, oh baby
I love you, I really do

Obviously, Thurston Moore couldn’t even pretend to tap into the emotional aspect of the song, so there’s a bit of irony in his delivery, but they kept the quiet verse/loud chorus arrangement, and just loaded the chorus up with synthesizer blips and feedbacky guitar but never went over the top.

Had they raved up or broken down, it would have disrespected the song, and made it just another punk cover, ho-hum, but instead, I think they took the source material, stayed true to it, and made their own totally cool thing, though apparently Richard Carpenter didn’t like it. Which makes me like it even more, because fuck that dude. It was even released as a single, and topped out at #26 on the U.S. Alternative Airplay chart, the final time Sonic Youth would ever trouble a U.S. chart.