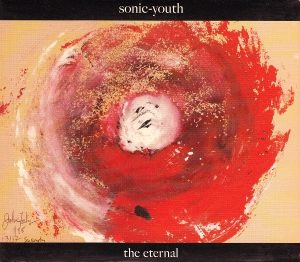 A short history of the cosmic quadrangle of Sonic Youth, R.E.M., Wilco & Pavement.

Whew!! Since this was mostly off of the top of my head — I googled a couple of things to make sure I got the dates right, of course — I’m sure there are connections that I missed. And so we are here to praise Sonic Youth one last time, as their final “pop” album, The Eternal came out in 2009, not on Geffen, but on Matador.

For me, the highlight of The Eternal is Lee Ranaldo’s “Walkin’ Blue,” where his guitar, Thurston Moore’s guitar, and Kim Gordon’s guitar start out playing licks and eventually sound like air-raid sirens after the first verse. There’s also another cool bit of harmonies with Ranaldo & Moore on the choruses.

After the final chorus, it’s rave-up time, as the air-raid siren guitars rip and roar around Steve Shelley’s drums and Mark Ibold’s bass, eventually getting more and more dissonant until the song finally ends.

At the time, of course, we didn’t know Sonic Youth was already on the pathway to breaking up, so the reaction was “ho-hum, another really good Sonic Youth album,” though I gotta point out that The Eternal was Sonic Youth’s highest-charting album, making it to #18 on the Billboard Album Charts. And while this represents that period where legacy artists albums charted high because all of their fans — like me — were buying the physical media, it still counts. (For those of you who were curious, their previously highest charting album was 1994’s Experimental Jet Set, Trash and No Star, which topped out at #34.

I have no idea if any of their albums went gold. The only sales source I could find was their Wikipedia discography, and the sales numbers on that are from 2005. At that point, their biggest-selling album was 1992’s Dirty, with 329,000 sales. Even the sainted Daydream Nation had sold less than 200,000 copies by that time. So who knows how it’s changed in the last 17 years?

Of course, like so many great and influential artists before them, Sonic Youth’s impact can’t be measured by sales, but rather all of the artists that they helped and inspired over the years — many of whom did have massive sales — and by that measure, they were one of the all-time greats.